Had he not be felled by assassin James Earl Ray’s fateful shot in Memphis on April 4, 1968, the Reverend Dr. Martin Luther King Jr. would have been 79 years old today.

So, in honor of this truly iconic American’s birthday, we decided to finally post some of the many pictures we took this past August at the amazing National Civil Rights Museum in downtown Memphis. 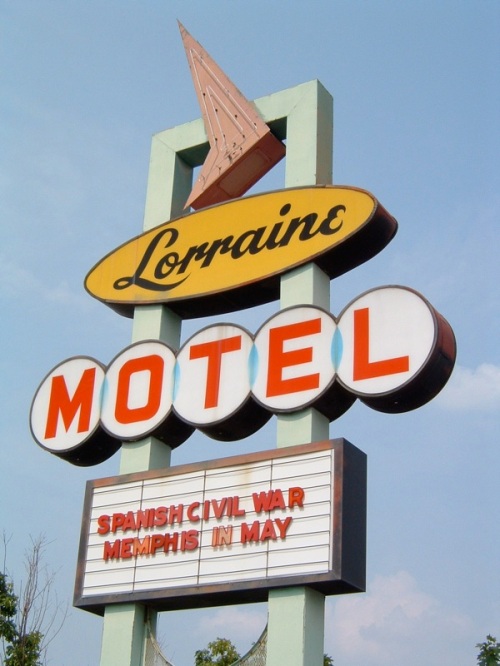 Housed in the beautifully preserved shell of the historic Lorraine Motel — the site of Dr. King’s assassination — the museum does not allow cameras of any kind inside, so though we have no pictures of the powerfully moving contents of the museum , trust me when I say that this place is really something special.

Stepping inside, you are immediately transported back in time through a series of photos, videos and dazzling interactive displays to the darkest days of the pre-Civil-Rights-era South. Everywhere you look there are letters, pictures and actual items from the era.

One display, centered around a carefully preserved segregated lunch counter (from a diner somewhere in North Carolina) incorporates real-life documentary footage on a screen overhead. The hateful racial epithets hurled your way as you stand at the counter are bone-chilling, and I can tell you I heard more than one grown man reduced to tears.

But perhaps the most moving of the interactive displays on the main floor is a scale replica of the Birmingham, Alabama city bus where Rosa Parks refused to surrender her seat.

Stepping onto the bus, the first thing you see is the haunting life-size figure of Rosa Parks sitting up front. You are encouraged to sit nearby and then, almost immediately, the lights dim and a light pops on over your head as the seat beneath you vibrates jarringly to life. It was so startling that I almost hit my head jumping out of my seat.

And then, a light pops on over the bust of the driver up front and he loudly orders you to move to the back of the bus. If you refuse, he gets angrier and louder until finally a soothing female voice comes over the PA system to tell you that had you not moved by then, you would have been arrested and thrown in jail. I know it sounds kind of gimmicky, but the effect is chilling.

But the real goosebumps come towards the end of the self-guided tour as you begin to follow a winding ramp upstairs. Everywhere you look are timelines and beautiful displays detailing — hour by hour and sometimes, minute-by-minute — Dr. King’s schedule leading up to that tragic day in April, 1968.

And then, with Mahalia Jackson’s voice ringing in the distance, you suddenly find yourself on the second floor of the Lorraine Motel, standing between two glassed-in motel rooms used by Dr. King and his supporters the day of the assassination.

Inside, everything is left as it was that day, cigarettes in an ashtray, newspapers on the bed, food wrappers on the table, it literally looks and feels like someone is still staying there. And then you notice the window between the two motel rooms. Moving closer and peering outside, you can actually see the balcony where Dr. King was shot and died.

The effect of seeing the balcony up close was so powerful, I actually gasped. And trust me, gasping was a relatively calm reaction compared to other visitors nearby. But who can blame them…I mean, this is no interactive display, this is the real place where real history unfolded in all its gory detail and…wow…you just wanna break down and cry. It’s insane… 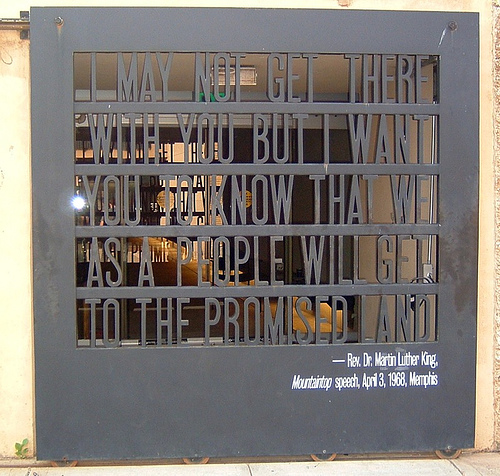 Collecting our thoughts and grabbing some Kleenex from Christine’s purse, we then headed back downstairs to the second part of the museum across the street. Just behind a striking iron gate (pictured above) incorporating a memorable section from Dr. King’s final “I’ve Been to the Mountaintop” speech, you walk down a long, subterranean hallway.

Overhead, footage of Dr. King’s funeral is accompanied by stirring quotes from politicians, world leaders, well-known actors and even just regular folks. I actually wish we could have spent more time soaking all this up, but the museum was closing, so we had to move through there pretty quickly.

Upstairs, you realize for the first time that this portion of the museum is housed inside the actual boarding house (above) where Dr. King’s killer, James Earl Ray, stayed in the hours before the assassination.

Here too, Ray’s room is preserved exactly as it was when he was there. And though the room itself is glassed-in, even from a distance, you can see the window from which Ray took aim and fired upon Dr. King on the balcony of the Lorraine Motel across the street.

The thing that really creeped me out is how close the Lorraine is from the boarding house, I mean, even a lousy marksman could have made that shot. And staring out that window at the balcony with the wreath is just…wow…

The rest of this second wing of the museum is dedicated to an in-depth examination of the assassination. There are compelling displays about the trial, detailed police reports on the shooting, court documents, and one wall is entirely devoted to conspiracy theories about the assassination. I was dying to spend more time here, but since we were practically escorted from the building due to the hour, a deeper examination of this room will have to wait for next time.

But the final display of the museum is perhaps the most moving of all. As you leave the building, you are reminded of the legacy of Dr. King through clips of modern-day political activists like Bono, Nelson Mandela, Jesse Jackson and even Oprah Winfrey. Here again, I found myself moved to tears, but in a good way. I’m not kidding, it was pretty inspiring stuff…

And so, on what would have been his 79th birthday, here’s hoping that the legacy of Dr. Martin Luther King lives on. Happy birthday, Dr. K!