Located at 648 South Broadway, in the heart of downtown Los Angeles, Clifton’s Cafeteria is the last of a once thriving chain of depression-era cafeterias. And though I had never been there before, Christine, having worked downtown for so long, is something of a Clifton’s veteran.

So, when our friend Ginger said she wanted to eat somewhere “a little different” on her last visit, we knew exactly where to take her!

Founded in 1935 by Clifford Clinton, the crazy cool Clifton’s is actually known as Clifton’s Brookdale and is designed to resemble a giant forest scene. Having spent several summers as a young man in the Santa Cruz Mountains — my home turf, right on! — Clinton wanted to recreate the magic of a beautiful redwood forest indoors. And, man did he ever!

Clifton’s Brookdale has a 20 ft. waterfall and stream, stuffed and mounted moose and deer heads, a log cabin and even a fishing grizzly bear. And as if that’s not enough, there is also a tiny cave-like chapel — yes, I said chapel! — where you can sit in front of a diorama of a forest and listen to a scratchy recording of “The Parable of the Redwoods”. So cool! 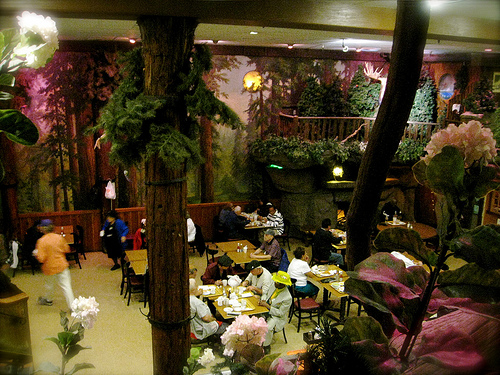 And with a vast selection of cafeteria staples to chose from, the food is just as varied as the decor. Of course, like most cafeteria food, it was pretty bland, and the fried chicken I had was downright deadly. Really bad stuff!

Ginger and Christine both fared much better with the macaroni and cheese and a fairly tasty sliced roast beef with au jus. But I think all three of us agreed that if we had to do it over again, we would probably eat somewhere else first, then come to Clifton’s for coffee and dessert.

Yes, amigos, it’s true…despite my ice cold skirt steak, I would totally go to Clifton’s again. If not for the food, then surely for the atmosphere, which seriously kicks ass. And aside from being a kitsch-lovers paradise, Clifton’s is positively gigantic. I’m not kidding, you could explore it for days.

To start with, Clifton’s is a whopping three stories tall. Yep, three stories of faded, backlit nature photos and fake trees! Awesome! And though the third level was closed to the public that day, the manager kindly let me sneak up there with my camera for some quick pics.

Much more refined than the lower two levels, the third floor has kind of a vintage ice cream parlor meets red-walled whorehouse thing going on that is really groovy. There are tons of cool mementos up there too, not just from Clifton’s Brookdale, but also from it’s far sexier cousin, the long lost Clifton’s Pacific Seas. Man, wish we could have seen that place in it’s prime! 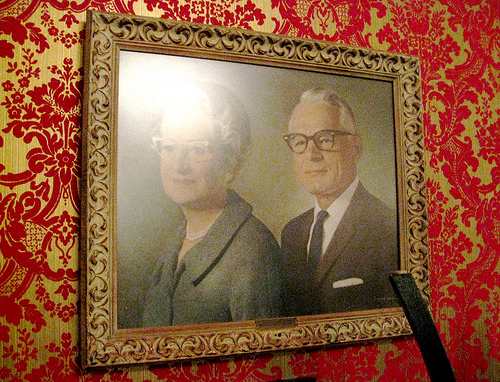 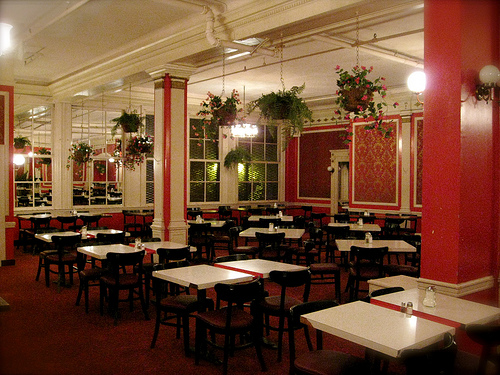 So, if you find yourself downtown with a couple of hours to kill, you gotta check this joint out. Seriously, there is no place in Los Angeles like it.