Since I’m sure most Iowa caucus voters have already decided which way they’ll vote, and I highly doubt that we have any readers out there anyway, the political fallout from this post is probably gonna be pretty minimal at best. 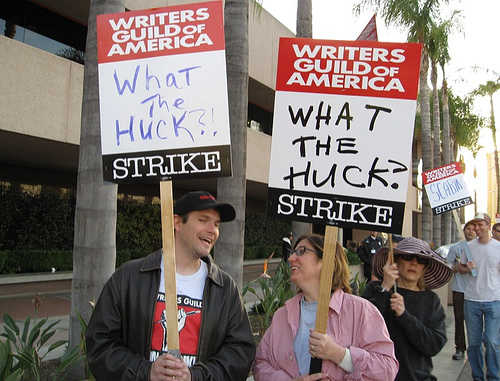 But just in case there are a few Iowan’s on the fence about who to vote for today, I offer you these amusing picket signs protesting Republican Presidential Candidate Mike Huckabee’s picket-line-crossing appearance on “The Tonight Show With Jay Leno”. 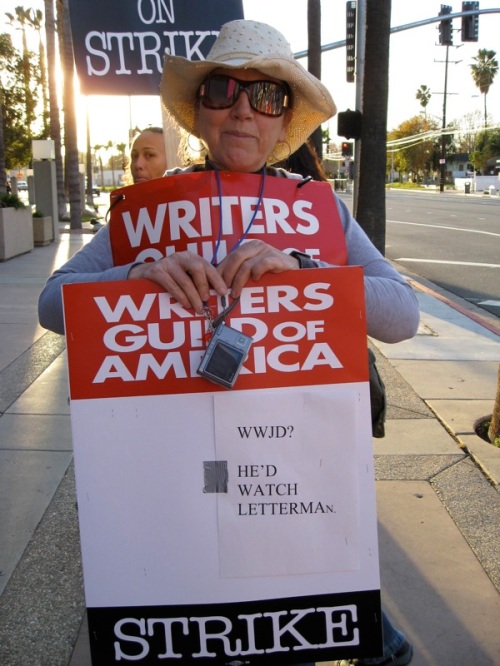 While the expected “I Don’t Heart Huckabee” picket sign was still my favorite, some of these others ones came pretty damn close. So, enjoy the ongoing parade of WGA Huckabee bashing picket signs!

And if you’re a Republican in Iowa, I’d say vote for McCain or the Mormon. They might waffle a bit on the issues, but you’d never catch either one of them crossing a union picket line. Well, you know, at least during an election year… 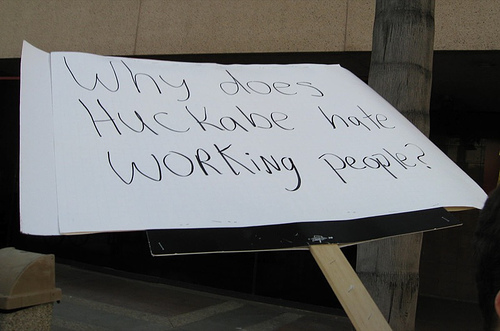 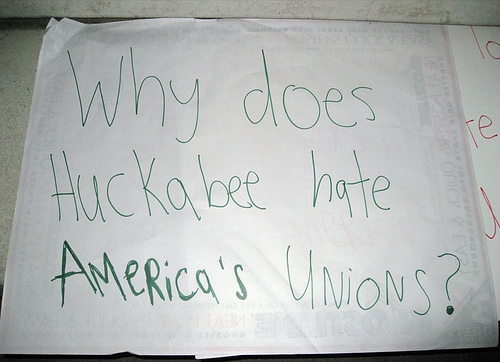 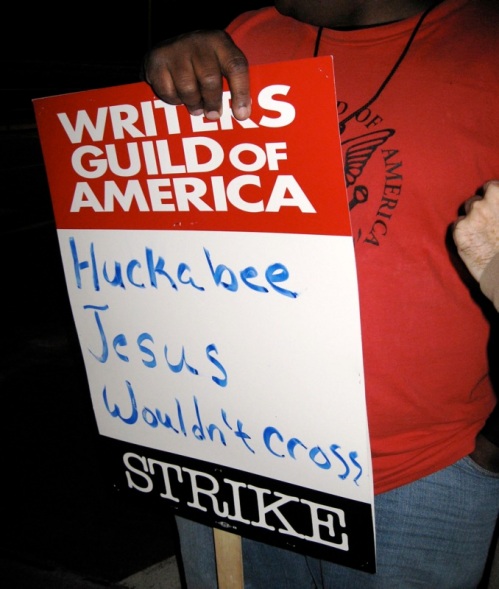 The Return of Late Night…

Having just power-Tivo-ed through all four of the major late night shows that returned to the air tonight, two of which employed WGA writing staffs (“Late Night With David Letterman” and “The Late, Late Show With Craig Ferguson” on CBS) and two of which, sadly, did not (“The Tonight Show With Jay Leno” and “Late Night With Conan O’Brien”) I can offer you now, a verdict. 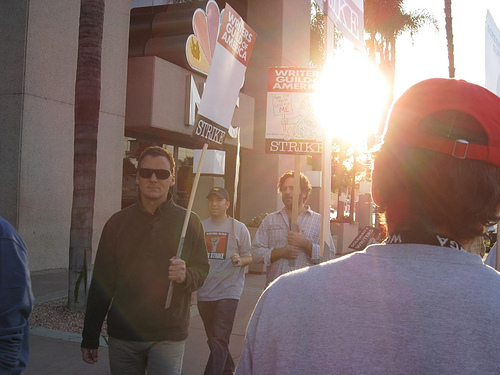 And to accompany that verdict, here are some pics from today’s picket line at NBC. As you can see there were huge crowds picketing the network’s heavily promoted “Return of Late-Night”. And isn’t it funny how none of the publicity mentions what the shows are returning from…writer’s strike? What’s that?

Anyway, onto the shows. While old Jay and Conan tried their damndest on NBC, I gotta tell ya, man, the WGA staffed shows (who were allowed to return to work when Letterman’s company Worldwide Pants brokered an independent deal with the guild) were far superior to the lamely improvised bits that filled up much of Leno and O’Brien’s air time. And the guests…yikes? 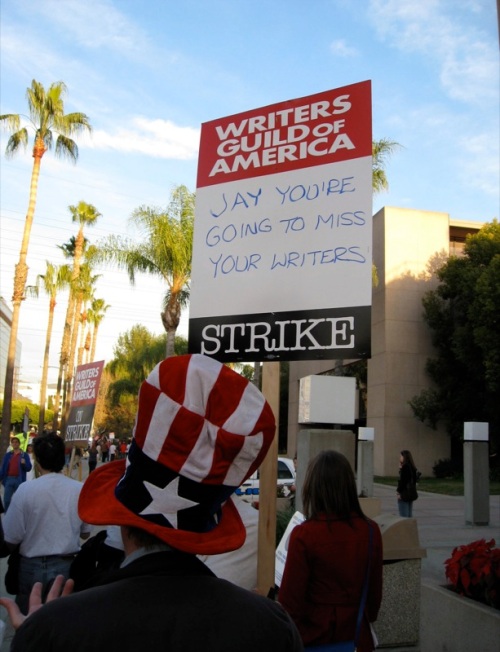 His best “Bill Clinton with the band on Arsenio” imitation aside, the guitar-strumming Republican Presidential Candidate, Mike Huckabee was a real snooze. And Jay’s well-intentioned, but painfully unfunny auidience Q&A made Ellen Degeneres’ recent material look funny. It wasn’t entirely Jay’s fault (and in his defense, he has been really good to us folks at NBC) but man, it made for some pretty horrendous television.

Conan was a little funnier, but by the twenty minute mark, it was clear that even he was running out of steam. And when your guest is the criminally unfunny Bob Saget (host of NBC’s criminally awful “1 vs. 100” ) you don’t have very much to work with. It was like Conan’s usual show, just not as funny.

And try as they might, both Conan and Jay came across as a little desperate, trying to fill time however they could with whatever they could. Which is really never a good idea…

On the other end of the spectrum was Craig Ferguson, who I am not at all a fan of. But he was very funny and quick with the jokes, and though the total absence of guests (was no one from a third-rate CBS reality or game show available?) was kind of odd, he did make up for it by referencing the strike many times. So, kudos to you, Highlander! 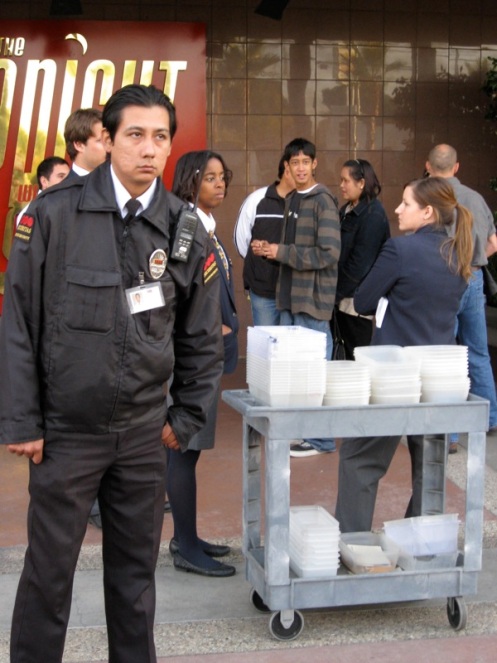 And then, there was David Letterman. I’m not kidding, his first show back will someday be the stuff of TV legend. It was biting, hilarious and truly, spectacularly entertaining. Not only did he reference the strike and the fact that the WGA’s demands are beyond fair, but he actually opened the show with dancing girls with WGA picket signs. Hilarious!

And the searing strike commentary by his head writer was awesome. It is really hard to find the humor in much of what has transpired these last nine weeks, but wow, he nailed it. Christine and I were stunned that old Les Moonves even let that shit air. I mean, it was pretty incendiary stuff! 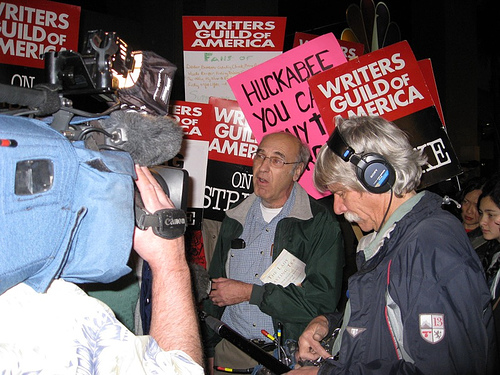 And even though Robin Williams was, as always, imminently fast-forwardable, the rest of the show more than made up for his antics. My apologies to Jimmy Kimmel, whose show we couldn’t Tivo or watch as we were busy with the others, but I hear he got up on his WGA soapbox a few times too, so, cool!

And last but far from least, I gotta say Conan and David Letterman’s rocking “strike beards” have to be seen to be believed. Seriously, they put my puny attempt at facial hair to shame in a big way. 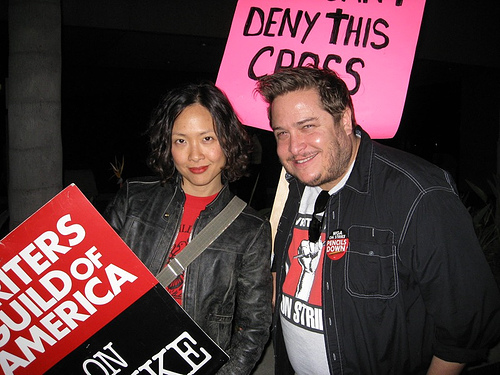 So, rock on strike beards, long may you grow! And remember, if you’re looking for good late night TV from here on out, stick to union shows. Go, Letterman!

Wow, I know, 2 in a row from Farmer’s Daughter. I have been busy fulfilling my “Make” duties! These again are for girls I work with. The necklace was started in August. I even brought in the car on our Music Highway tour of Tennessee. It was a bit difficult to make. I’d like to challenge anyone to knit closed a ball while holding the stuffing inside it! 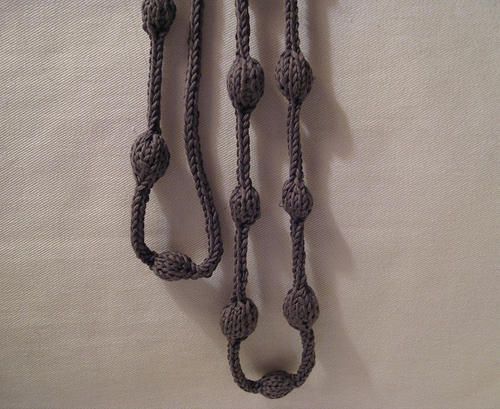 Once I got the hang of it, it wasn’t so bad, but it still was awkward. Natalie had seen the pattern in a book I checked out from the library called “Domiknitrix”. She showed some wicked enthusiasm (Tom’s words, not mine) for the necklace, so I had to make it for her. 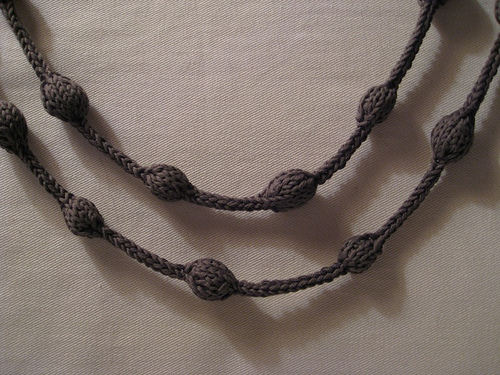 The scarf was crocheted for Sarah. I haven’t done a lot of crocheting, so it started off as a bit of a challenge too. I had tried to knit several different scarfs, but every one was coming out too manly. I wanted something pretty and feminine for her, so I pulled out “The Happy Hooker” and found this pattern. It’s made with organic cotton yarn and is really soft. 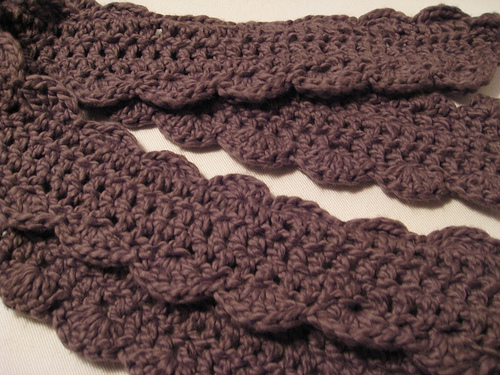 Both girls really seemed to like their gifts, so, yeah for me! Now if I could just finish that scarf for Yeti9000, all would be right with the world…

Farmer’s Daughter here again. I’ve been waiting to write about some cool Christmas gifts that I made this year. I didn’t want to give away any surprises before the gifts were given, but now it’s safe. 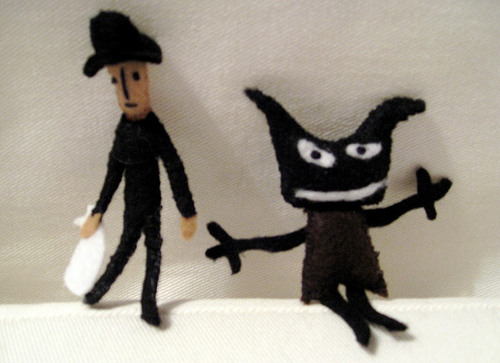 These were all made for girls I work with at The Library Store. The 1st two are from “The Cute Book”, which has lots of sweet things too. The ones I chose just happen to be more on the sinister side. The one holding the bag is called the Kidnapper and the other one is Bad Guy. 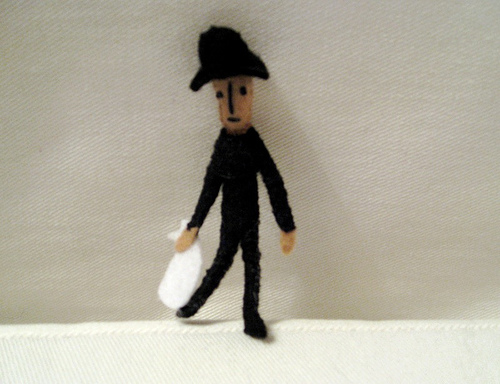 They are made with felt, most of it handsewn together, a few pieces glued on, and stuffed with polyfill. They are as tiny as they look, so it was definitely difficult to stuff them. I used a toothpick, but even that was hard. Alyssa appreciated them and said they were her two favorite characters from the book. 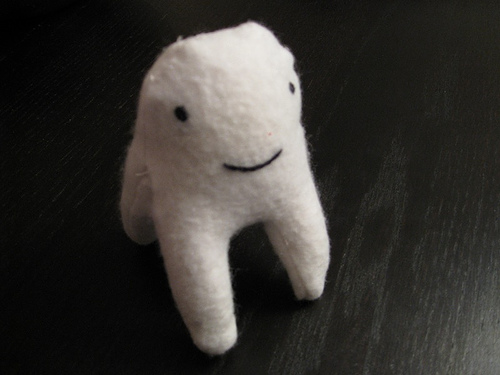 The tooth was for Natalie who loves teeth things. It’s a bit bigger and so it was easier to make. It’s made the same way, but no gluing on this! Those face details are embroidered! It’s from a book called “Softies” which has tons of cool toys you can make and includes patterns for most.