OK, maybe I’m just totally clueless, but I had no idea this place even existed in L.A. until last week.

I had a meeting with a producer/manager friend of mine the other day and when trying to find somewhere to meet for coffee that was kind of mid-way between his place and mine, I heard these immortal words: “Wanna just meet at the Magic Johnson Starbucks in Baldwin Hills?” 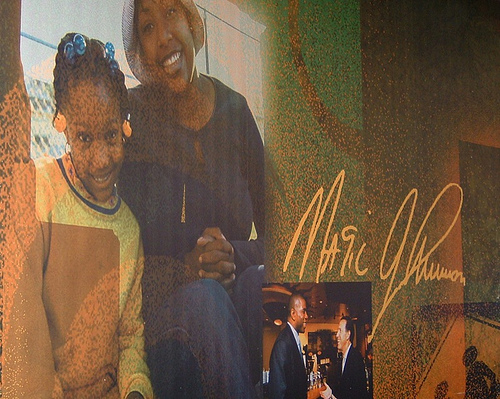 “Hell yes I wanna meet at the Magic Johnson Starbucks!” I mean, whoa…who even knew that such a place existed?

Breathlessly grabbing my camera, I agreed to meet him there and immediately set off to Baldwin Hills — which, incidentally, is so NOT mid-way between my place and his — to see what “Magic” Mr. Johnson could work with the world’s largest gourmet coffee chain.

The answer, unfortunately, was not much. Everything was the same as a regular Starbucks (the signs out front, the drink menu, etc.) except for one really cool thing. In place of the Griffin & Sabine-lite artwork on the walls, this Starbucks was adorned with sunny portraits of inner-city kids, smiling single mothers and best of all, the man of the hour…Mr. Magic Johnson himself! Cool!

I also learned that aside from the Starbucks and the groundbreaking Magic Johnson Movie Theatre nearby, the Baldwin Hills area is also home to the Magic Johnson 24-Hour Fitness AND the Magic Johnson TGIF! Wow, apparently Magic owns everything down here…he’s like the male Oprah!

Anyway, my latte was a work of art — with flawless foam, which is pretty hard to find at Starbucks these days — and the service was excellent. Now if I could only convince him to open the Magic Johnson Waffle House, all would be right with the world…