Hooray, the agonizing wait is over! After pre-ordering our Wii Fit more than a month ago on Amazon, Christine and I were overjoyed today to finally receive it in the mail. I swear to God, I was so excited to get it that I practically jumped the UPS guy in the driveway when he pulled up. 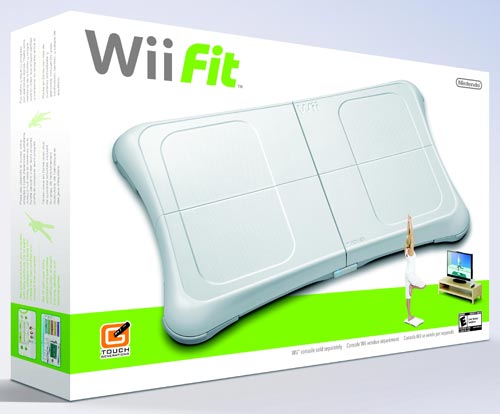 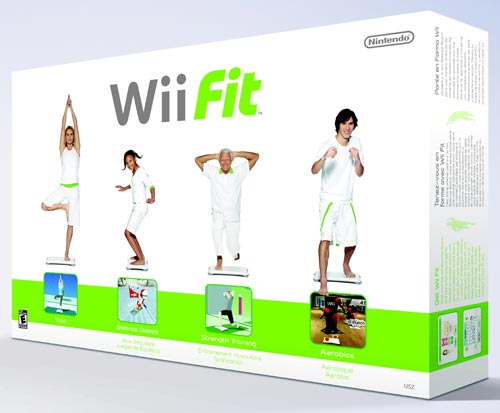 Man, I thought we loved our Wii console before…but now, with the addition of a Wii Fit balance board (pictured above) and dozens of fun workout options in four key categories — yoga, aerobics, strength training, and balance games — we are never gonna leave the house again!

Included in every Wii Fit box is the shiny, super cool white balance board and the game. Simply plug it in and play. And while the exercise options utilizing the board all sound very fun, the one I’m most looking forward to using to lose weight is the jogging “game”.

Using only the Wii remote, the jogging program takes your Mii avatars — cool little Wii people you create from scads of templates at Wii Central — on a jog through a candy-hued Wii park, city, or other background of your chosing. All you do is tuck the Wii remote into your pocket and set off! 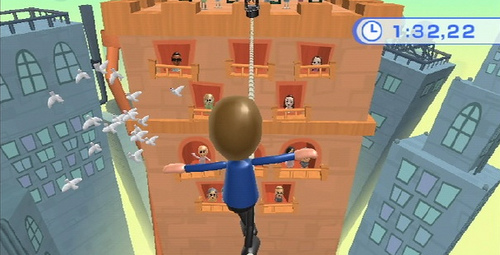 Another rocking feature of the Wii Fit is the fact that it tracks your daily progress. Using easy to read and understand charts and graphs, the Wii Fit allows you to keep tabs on your body mass index (BMI) and weight loss over time and even allows you to compare charts with other members of your household. Whoo-hoo! Game on, Farmer’s Daughter Bean!

Speaking of, Christine is much more excited about the yoga program, which uses the Wii Fit balance board to make sure you are posing correctly and staying perfectly balanced while you work out. This looks pretty cool too, but from what I’ve seen the graphics here aren’t nearly as eye-catching as the jogging program.

And since I think the idea of “playing” a jogging game will make the fact that I’m exercising much more bearable, I’m gonna need all the digital bells and whistles I can get! Know what I’m saying?

Anyway, will report further once we’ve had a chance to use this thing some more, but in the meantime, here’s to Nintendo for making exercise fun for the video game geeks of the world! Rock on, Wii Fit!