OK, normally MTV’s Video Music Awards are totally fast-forwardable. Overlong, boring and packed to the gills with live performances by people who Christine and I can’t stand — last year offered us the Jonas Brothers and Lil’ Wayne, nuff said — but as you can tell from my previous post, this year, the show was kind of insanely watchable. Emphasis on the insane!

Host Russell Brand was almost as cheeky and hilarious as he was last year, and the opening tribute to Michael Jackson was very cool, even if Madonna got a little Madge-centric sometimes in her speech. I mean, come on, your worst review for “Swept Away” was better than whole years of Jackson’s life, so, stop with the comparisons already… 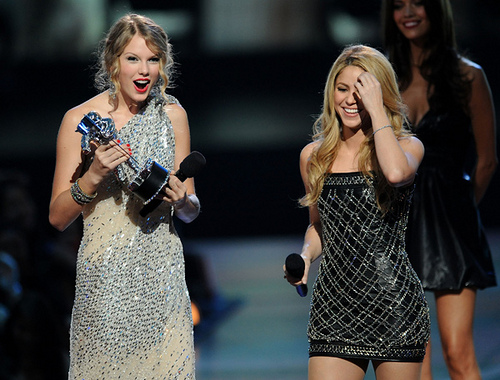 But the real fireworks last night came when Kayne West interrupted Taylor Swift’s sweet-ass acceptance speech to tell the crowd that he thought Beyoncé should have won instead.

Yep, the man who famously said that George Bush hates black people and gets all bent out of shape when he doesn’t take home enough gold at award shows is judging the winners and losers in categories he’s not even eligible for! WTF?!

Sorry, dude, I’ve seen every video in that category and Taylor Swift’s was the best in the bunch. The song rocked, the video told a story (shocking, I know, in today’s boring-ass video age) and it looked great. What else is there?

And honestly, whether you liked her video or not, for you to interrupt Ms. Swift’s speech like that to tell the world that she didn’t deserve the award she’d just won was just plain shitty. And on live TV no less? Yikes, ain’t no half-ass apology gonna make up for that shit…

I mean, seriously, you can make fun of George Bush and you can act like an egotistical prick all you want, but you verbally beat down America’s Sweetheart on national TV…well, that shit’s gonna haunt you.

Have a nice life, a-hole!