Well, it’s official…the L.A. County Board of Supervisor’s war with our beloved taco trucks has claimed it’s first victim. And while the circumstances surrounding the citation are a bit odd — the chickenshit pendejo who called in the complaint used the name of the owner of the truck when he called! — the outcome is downright chilling.

The L.A. County Sheriff cited the owner of La Flor de Sahuayo, Alejandro Valdovino, with a misdemeanor violation of the new ordinance. That is the maximum penalty allowed by law, and if you ask me, that’s just plain loco!

So, to drum up support for the cause and encourage all of those taco-loving folks out there who have not yet signed the petition, to do so, our friends at saveourtacotrucks.com have started selling t-shirts! Yeah!

Emblazoned with the catchy: “Carne Asada is not a Crime” on the back and the words: “Salva Las Trocas” on the front, the shirts have apparently been selling like, well…taco truck tacos. So, get yourself a shirt at the website and sign the petition while you’re there, or better yet, cut out the middle man altogether and forward your thoughts directly to your County Supervisors at the links below.

And no, you don’t have to be from Los Angeles to bitch these folks out, you just have to love yourself some tasty street tacos! 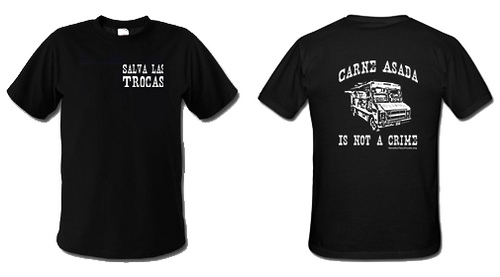 Thanks to the movement’s rocking man of the hour, Aaron Sonderleiter, for forwarding me this information via e-mail and, as always, que viva las trocas!

District 2
Yvone Burke
(213) 974-2222
seconddistrict@burke.lacounty.gov
This seat is still up for grabs after Tuesday’s election, so Burke may or may not get your e-mail…but, what the hell, send it anyway!