Tag Archives: The Americana at Brand

Just finished cleaning the kitchen and prepping the meat and beans for tomorrow’s enchilada fest, and as I turned off the radio (thanks for another amazing year of Christmas jams, KOST!) and that last light in the kitchen, I couldn’t help thinking of how lucky I am.

It’s been a long, strange year, but I have amazing friends, the coolest family in the world and a wife and little girl who make every single day that I am alive truly magical, even when it’s totally not.

And now, as I drift off to sleep with the smell of Christmas in the air — who says Christmas can’t smell like enchiladas? — I just want to thank everyone I know and love, those sleeping under our roof tonight and those who aren’t, for everything you do to make my life…well, kinda rad. You guys rock!

So, before my pot of holiday cheese totally bubbles over I’ll leave you with Greta’s 2010 Santa pic. As you can see, she refused to smile, but, on the upside, she didn’t cry like last year either. So, I call that progress!

With the 2009 award-season already in full swing and the movies Christine and I have seen this fall essentially boiled down to two — “Precious” and “The Road”, which we are seeing tonight — we were both thrilled to learn that the super cool Pacific Theaters at The Americana in Glendale are now offering Monday Morning Mommy Movies! 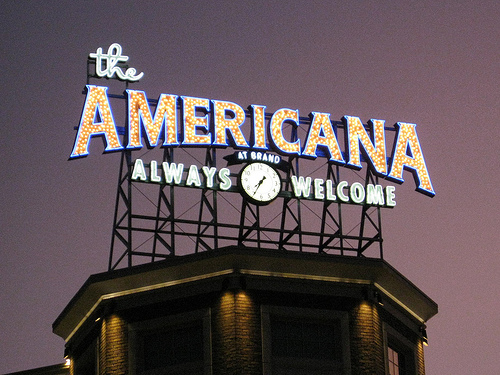 The rules are pretty simple. Every Monday at 11:00AM, parents of any gender — I guess Daddy and Me Mondays didn’t have the same ring to it! — can bring their babies/toddlers and any older kids they want, to see a new release movie in an actual theater (!) without the fear of bothering other viewers. I mean, when the seats are packed with screaming babies, who’s gonna complain, right?

Needless to say, as soon as we heard about it, Christine and I were hooked. The problem is the movies they have been picking kinda sucked. Yes, the theater picks the movies. And honestly, that is my only complaint with the program. I mean, ain’t nobody going to see a movie on Monday morning EXCEPT sleep-deprived parents of young children, so, why not let us have the run of the joint for that first showing? Kinda stupid if you ask me.

Anyway, when the Michael Jackson documentary “This Is It” hit theaters a couple of weeks back — and more importantly, was selected as a Mommy and Me movie! — Christine and I packed Greta in the car and headed to the Americana. We sat in the fourth or fifth row back with our friends Chris and Jess and their new baby girl, Lily, and lemme tell ya, we had a blast!

Sure we were surrounded by strollers and diaper bags and shit, but, since most of the parents were sitting on the floor in the handicapped section behind us, we pretty much had the entire row to ourselves. Greta got to crawl around the seats a little, Christine and Jess could spread out to nurse, it was the next best thing to watching a movie at home.

And best of all, the movie itself rocked! The music, the dancing, the sheer enormity of the staging, the King of Pop in fighting form…there wasn’t a slow moment in the entire movie and more than anything, it makes you realize how freaking awesome that concert would have been. Wow, so sad…

Anyway, the girls seemed to dig the movie, with Greta even grooving a bit to “Wanna be Starting Something” — which I played into the ground this summer on our iPod! — and the older kids were seriously rocking out. There was one little African-American kid with this gigantic Afro who was dancing up and down the aisles the whole movie…it was so awesome! 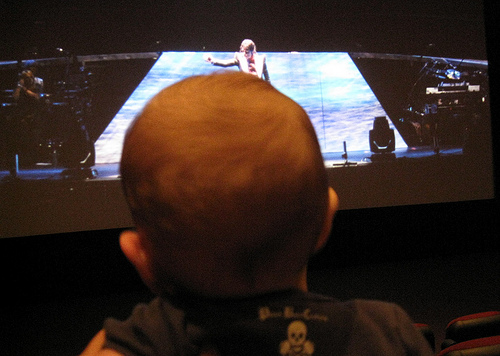 So, kudos to Pacific Theaters for starting up such a cool program to begin with. And lest you think the Americana is the only place to see a Monday Morning Mommy Movie, think again. The screenings are held at Pacific Theaters all across the Southland, so, check it out!

Oh yeah, and if you wanna spread out on the floor with your wee one, I recommend you get there really early because those “seats” were snapped up by 10:30. At least that’s what Chris and Jess told us when we rolled in at 11:05…