A text message from Obama…

I don’t know why everyone’s all complaining that they didn’t their text messages from Barack Obama the other night when he chose Senator Joe Biden as a running mate. I mean, yeah, the story hit the internet fast and everything, but Christine and I got our text message from Obama just fine. See… 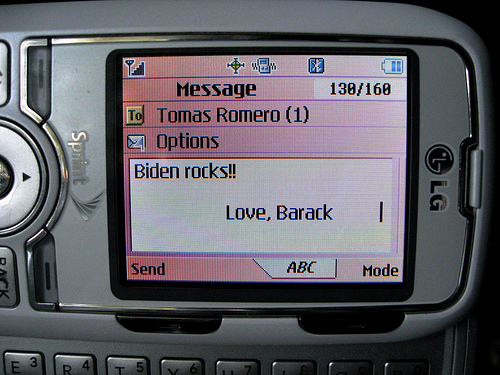 Ah, well, I guess he just loves us more. In any case, can’t wait to get our cool Obama-Biden bumper stickers! And though I still think an Obama-Clinton ticket would kick ass, we both actually dug much of what Biden had to say in the democratic debates earlier this year and his selection makes a lot of sense.

Plus, Biden has the all-important tragic backstory that wins us over every time. Biden’s first wife and infant daughter died in a car accident on their way to celebrate his first Senate win many years ago, and Biden was actually sworn in at the hospital bedsides of his two surviving sons. Wow…if we’d known that sad-ass story, we probably would have voted for him in the primary!

Seriously, that’s political backstory gold, baby. Man, I sure hope McCain likes the view from his seven houses, because something tells me he’s gonna be spending a lot of time in them come 2009.

Anyway, here’s hoping our guys have a rocking time at the Democratic National Convention in Denver this week. Christine and I loved that town almost as much as Nashville. Oh, and Barack, if you and Joe need any recommendations on where to eat or drink in Denver, text us, dude. We’ll totally hook you guys up. L8ter!