Finally saw Tim Burton’s rocking version of “Sweeney Todd: The Demon Barber of Fleet Street” over the weekend and let me tell ya, it’s bloody good…emphasis on the bloody. Seriously, I haven’t seen this much spraying, operatic bloodletting since the first volume of “Kill Bill”, and that time, the bloodiest scenes were in black and white. 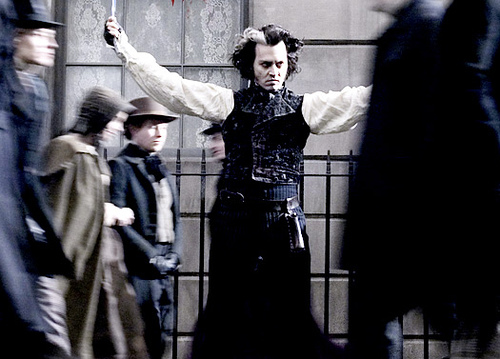 Save for the standards “Pretty Women” and “Not While I’m Around” — which are way darker in the context of the show than they are as stand-alone songs — I wasn’t that familiar with the original musical, but wow, it’s good. Christine found some of the numbers a bit stagey and claustrophobic, but I really dug the musty intimacy of it all.

Set in and around a gloomy, beautifully dank Victorian London, the movie and the songs are as dark as can be. And while the ads make it look like quirky, Tim Burton-lite, this movie is one of the darkest things he’s done in a while.

I found the songs and humor to be funny as hell, but I should warn the uninitiated that this “Sweeney Todd” is not for the feint of heart.

Anchoring the movie and proving once again that he can do almost anything onscreen, the always-astonishing Johnny Depp rocks in his first full-blown musical. Ditto for “Borat’s” Sasha Baron Cohen (as Depp’s hysterically oily rival, Pirelli), Alan Rickman as the villainous Judge Turpin, and the incredible little boy who plays Toby (newcomer Ed Sanders).

But fans of the musical know that the dark heart of the show has always been that wily scene-stealer, Mrs. Lovett.

I read somewhere that Stephen Soundheim loved her character so much that he actually demanded (and got!) final approval for the casting of Mrs. Lovett. And though Helena Bonham Carter wasn’t the best singer he auditioned, she was by far the best actress. And lemme tell ya, Soundheim was right. Helena Bonham Carter is spectacular in the role.

I’ve been a huge fan since I first saw her in “A Room With A View” and Carter has continued to amaze me ever since. If you haven’t seen her in “Fight Club” you haven’t lived. Not only did she blow Brad Pitt and Ed Norton off the screen, but her twisted, manic performance as Marla Singer is one of the great screen characters of the 1990’s. Really amazing stuff!

And though the content of her “meat pies” would turn even my hearty stomach, I gotta say if Carter’s saucy Mrs. Lovett was selling them…I’d be the first in line!