The leadership of the Screen Actors Guild might be saying publicly that talk of an impending actor’s strike is a “distraction” during their difficult ongoing negotiations with the AMPTP, but if you ask me, SAG created this distraction on their own, and they are loving every minute of it.

But if the rumors are true, and SAG truly is readying their troops for war, then why not just call a spade a spade and get on with it. Ain’t no shame in your game, SAG, just come out with it already!

Sure, another major strike right now would suck, but if you ask me, I say burn that mutha down, actors! After watching the DGA, my beloved WGA and even SAG’s crazy-eyed sister-union, AFTRA literally take it up the ass from the studios, I’m aching for someone to take a real stand against those greedy bastards.

And who better to do it than the biggest guild out there? SAG has 120,000-plus members, which is like ten times the size of the WGA. That is some serious union muscle, baby! And while the studios are always quick to undercut writers and directors, if they skimp on actors, well, they’re gonna feel that burn pretty quick.

With the ratings for last year’s TV season pretty much demolished by the WGA strike, I’m guessing the AMPTP might actually give this guild what they want this time. And, if it takes a strike to do it, then strike away, amigos. Like I’ve said before, I know a lot of writers who will be out there supporting your pretty faces on the picket lines every day, and, trust me, we have plenty of red t-shirts.

So, do what you gotta do when that deadline hits, Mr. Rosenberg — SAG’s current deal ends at midnight tonight — and know that whatever happens, we got your back! Go, union!

Replicating the strategy they used with us writers last year, the cheap bastards at the AMPTP have walked out of the negotiating room (again!) eighteen days into their negotiations with the Screen Actors Guild (SAG). Claiming that SAG’s “unreasonable” demands for modest increases in payments for DVD sales and online downloads has left them with no other choice but to discontinue talks “at this time”. 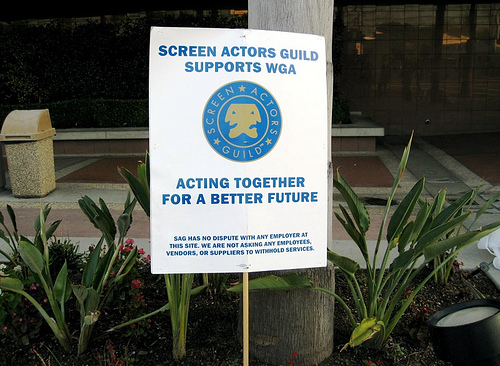 And so, true to dickhead form, the AMPTP abruptly suspended talks with the actors, even after SAG announced on the website that they were willing to “work around the clock for as long as it takes to get a fair deal” and “keep the town working”. Sounds kinda familiar, huh?

Reverting to their union-busting handbook once again, the AMPTP is rolling out the old “unreasonable” bit in the media — which they totally own, by the way — and playing up the fact that they are also calling off talks to focus on their upcoming negotiations with SAG’s trouble-plagued sister union, AFTRA, which are set to begin today.

Hmm…kinda reminds me of that time the AMPTP abruptly called off talks with WGA leadership to focus on their upcoming negotiations with the Director’s Guild. And if I remember correctly, the AMPTP forged a quickie deal with the DGA and then left us looking like total jerks until we caved — Yes, I said “caved”. God love ya, Patric Verrone, but we totally caved — and took their lousy deal.

Complicating things further for SAG’s rocking negotiating committee — led by bad-ass actor/studio ball buster extraordinaire, Alan Rosenberg — is the fact that SAG and AFTRA had been at war with one another for years.

From what I’ve gathered, the feud centers around the fact that SAG feels they should have more of a say in their wobbly, co-union existence with AFTRA since SAG has more members who contribute more money to the union’s coffers. The far-less-powerful AFTRA — whose members work in such areas as radio, TV news, talk shows, and several soap operas — feels the decision making should remain 50/50 as it has always been. And therein lies the problem.

Many of the SAG members I met on the picket line — several of whom are members of both guilds — have a deep-seated mistrust of anything AFTRA does. And tensions grew so strained a few months back that AFTRA decided — for the first time in 27 years! — to break off from SAG and negotiate a new contract with the AMPTP on their own. Hmm…as Yoda would say: “Unwise this decision was.”

What really sucks for the actors is that now that talks with the AMPTP have predictably “stalled”, the studios are going to use their negotiations with AFTRA — as they so masterfully did with the DGA — to show how quickly the process can work when so-called calmer heads prevail.

Of course, AFTRA is so weak — with their concerns literally light years away from SAG’s — that they’ll probably take whatever crappy deal the studios shove down their throats. And if recent history repeats itself, I foresee the AMPTP joyously announcing a finalized deal with AFTRA in a week at the most. Hell, AFTRA hates SAG so much at this point, they might even take a shitty deal just to spite them!

Either way, SAG will be left looking like the “unreasonable” jerks the AMPTP is already painting them as, and they will more likely than not take a crappy deal to save face. I say, screw that! Whatever happens, in the next few days, I urge you, Mr. Rosenberg, to learn from our mistakes and stay the course!

To quote from an impassioned e-mail you yourself sent out to the entire WGA membership during the heat of battle last December: “…we know that this fight is for the rights of all creative artists, and our collective future is at stake. We share your sound and reasonable goals for fair compensation for new media formats and we believe you are doing the right thing by taking a stand.”

Of course when you said “we”, you were talking about actors. But those same words could just as easily apply to writers now. As the pictures above illustrate, you guys were out with us every day during our strike, so, no matter what happens in the coming weeks, know this…we got your backs, man. Seriously, I got a couple dozen red and gray shirts just itching to come out and play!

To paraphrase the finale of your rocking e-mail, Mr. Rosenberg, the WGA “will stand with you for as long as it takes”. So, keep on keeping on, actors…and remember, we’re all in this together!

Oh yeah, and for the record, that’s “Thirtsomething” icon David Clennon with Patty and myself in the first picture; “Freaks and Geeks” star Dave “Gruber” Allen in the second shot; and the fetching Penelope Whidmore from “Lost”, actress Sonya Walger in the final pic. I should also note that I saw all three of the SAG actors above on the WGA picket lines many, many times, so, gracias amigos!