One of our first stops whenever we hit Santa Cruz is Marini’s at the Beach on Pacific Ave. Not only does Marini’s have the raddest selection of candy, salt water taffy and other assorted sweets on the planet, but now they also offer…ta da, Chocolate Covered Bacon. 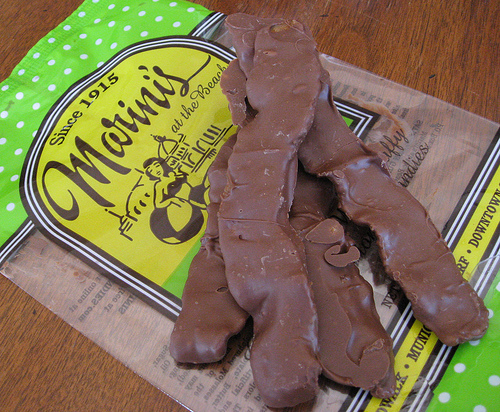 That’s right, amigos, Marini’s has found a way to merge two of Christine and my favorite food groups into one. And though Chocolate Covered Bacon sounds awesome in theory, it pains me deeply to tell you that the actual result is a bit odd. That said, I am glad we sampled it at least once.

It’s not that it tastes bad, because, well, bacon never really tastes bad. But the biggest problem I had with this concoction is that is was cold. I know that’s the only way to keep the chocolate from getting all melty and everything…but, I’m sorry, cold bacon is just not the same as the warm stuff.

And though the chocolate coating is delicious, it also seals the grease onto the bacon when it chills, which is even more off-putting. I left my piece out for a while and I think it tasted much better at room temperature. True, the chocolate was all goey by then, but the bacon was much more palpable. 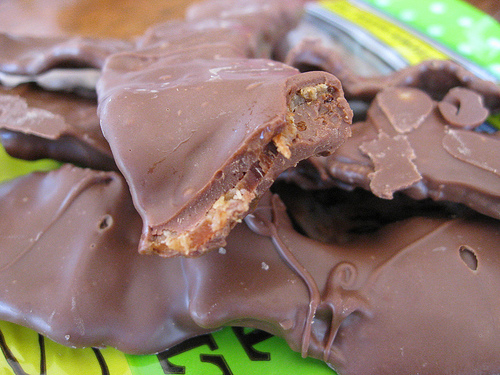 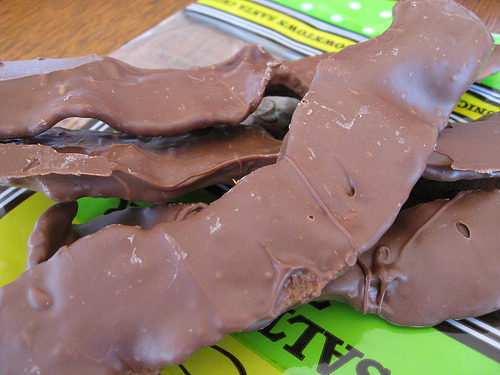 So, if you do decide to check out this strange marriage of flavors for yourself, I have two suggestions. One, call the folks at Marini’s up and order it ahead of time. They sells out of their Chocolate Covered Bacon every day, usually before noon, so, plan ahead.

And two, and this is a biggie, do not order more than one piece of bacon per person in your party. We got all greedy and ordered a half pound — which wasn’t cheap considering the whopping $9.00 per pound price tag — and that turned out to be way, waaaay too much for the four of us to consume. Seriously, one large piece of bacon is more than enough for a party of four. Hell, one bite per person would have been enough.

And while Marini’s doesn’t offer suggestions for accompanying drinks or anything, I recommend washing your bacon down with something nice and bubbly afterwards. We had a round of ice cold Cherry Dr. Pepper’s with ours, but, honestly, any carbonated beverage will fit the bill.

Um, you know, as long as it doesn’t have any bacon in it…