I know it happened over a week ago now, but when I found this picture on the White House’s official Flickr page yesterday, I literally could not stop smiling. Kudos to the bad-ass Dems in Washington and most of all, President Obama, for sticking to their guns and signing this landmark Health Care Reform bill into law. I know it’s not perfect, but it is a monumental step in the right direction and I couldn’t be happier about it, so…suck it haters!

I know it sounds corny, but if you ask me, this is what hope really looks like…

That old lying, hate-mongering, Republican VP candidate, Sarah Palin, might call herself an “intellectual”, vow to name her next son Zamboni — I’m not kidding, she actually said that! — and spend almost $5,000.00 a day on fancy designer duds, but when it comes to keeping it real, no one, and I mean no one, can beat our man, Barack Obama. 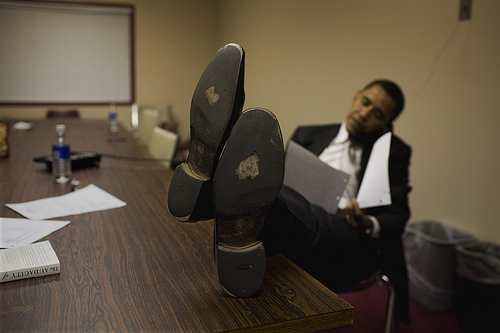 As you can see in the super cool pic by Time’s Callie Shell above, Obama saves his campaign money by having his shoes resoled rather than buying new ones. Yep, while the McCain campaign runs to Neiman Marcus three times a day to keep Sarah Palin looking “fresh”, Barack Obama runs to his cobbler. Awesome!

Seriously, can you think of another modern-era politician who would do something that freaking practical? Man, just when Christine and I think we could not love this dude any more…we do! Wow…

Thanks to our friend Danielle for the link to Shell’s rocking Obama campaign pics. To see more of these beautiful shots for yourself click here.