How boring was last night’s Oscar telecast? So boring that I couldn’t even stay awake to blog about it afterwards…and, trust me, I stay up late up all the time, so, that is really saying something.

Long, strangely-paced, badly-produced, hosted and directed, I gotta tell ya, last night’s show was probably the worst Oscar telecast of my adult life. And, yes, I’m including the David Letterman and Rob Lowe/Snow White fiascos. 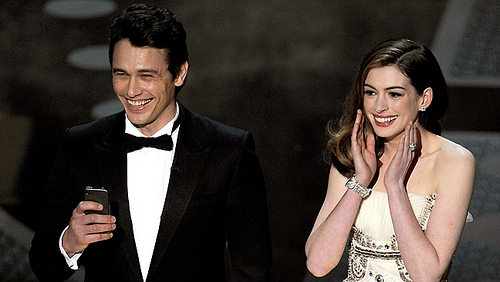 The thing that really kills me is that I was so excited about the hosts this year. I love Anne Hathaway to death and James Franco is great in everything I’ve ever seen him in…but, together, wow, they were like, epically bad.

I know most of the blame falls at the feet of the lame-brained writers and producers — did we really need those hideous “Gone With The Wind” and “Titanic” graphics projected in the background? And don’t even get me started about that freaky Bob Hope hologram…yikes! — but Hathaway and Franco were so boring that you could practically hear viewers switching the channel. Urgh…

To her credit, Hathaway at least tried to keep things lively, but the dead-eyed Franco looked like he needed a nap most of the night. Watching Hathaway desperately flit around the stage last night while Franco half-napped at the podium reminded me of those old elementary school group projects where one person on the team always worked harder than the other. As a team, they failed, but, I think I’d give Annie an “A” for effort!

Not helping the overall yawn-factor last night was the fact that almost everyone who was predicted to win, did. Which is cool for the very-deserving winners (way to go, Queen Amidala!) but makes for really boring television. Thankfully, “Inception” cleaned up in the technical categories…so, that was fun to watch, even if Christopher Nolan was denied his Oscar (again!).

Dying to hear what you guys thought of the show, and if you have any suggestions for better hosts for next year — hell, that Bob Hope hologram would be better than Hathaway and Franco! — I’d love to hear them too…so, fire away!

Wow…what a strange and kinda shockingly-cool pick. We’ve always loved Anne Hathaway and she has been game for anything on a number of award shows recently.  And James Franco is just plain cool in anything. Seriously, he even managed to make a guest-starring gig on “General Hospital” cool.

Yep, he was on a soap opera, like, all last summer. I’m just saying, the dude is cool, not to mention totally versatile. He writes short stories too! 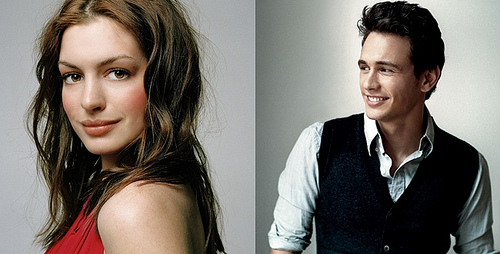 So, yay for both of them. Who knows, maybe their combined newbie host energy will make the Academy Awards a lot more fun? The only weird thing would be if Franco snags a Best Actor nomination for his rocking turn in “127Hours”. What does he do, like, excuse himself and hurry out into the audience to hear his name read? And better yet, what if he actually wins? Does he hold the award next to him the rest of the night? Weirdness.

Either way, kudos to the Oscar producers for thinking completely outside the box with this year’s Academy Awards host picks. Too cool!

Baldwin and Martin to host Oscars!

OMG, I know I’m more than a few days late on this one, but, what an inspired idea for Oscar hosts! Sure, Wolverine was fun last year, but the idea of a comic — not to mention musical! — genius like Steve Martin hosting this year’s Academy Awards with his “enemy”, Alec Baldwin is kinda awesome.

This way, even if that lame 10 Best Picture nominees idea falls flat, the rest of the show will still rock. And, who knows, if the guys are any good in Nancy Meyers’ upcoming romantic comedy, “It’s Complicated”, they might just snag a nomination or two of their own. I mean, come on, they are starring opposite perennial-nominee Meryl Streep in this one, so, that kinda increases the odds.

Either way, kudos to newly-minted Oscar producers Bill Mechanic and Adam Shankman for picking the right guys for the job. Now, just keep the rest of the show running smoothly and Bob’s your uncle!