Just watched Mickey Rourke and Bruce Springsteen pick up their well-deserved Golden Globes for “The Wrestler” and all I can say is…wow. These guys totally deserve any gold that comes their way this season, and if you haven’t seen “The Wrestler” yet, then get thee to a multiplex, amigos. This movie rocks!

Beautifully directed by Darren Aronofsky from a sweet, heartfelt script by Robert Siegel this movie truly soars. And while “Slumdog”, “Milk” and “Frost/Nixon” are still my top three, “The Wrestler” has made it a four-way race for our favorite movie of the year. 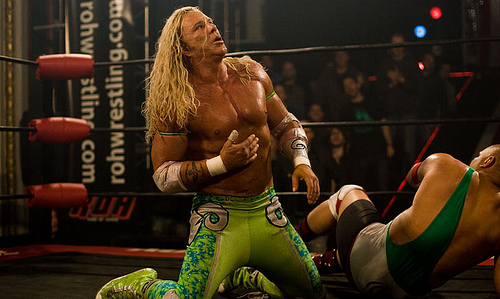 This movie has more heart, humor and soul in it’s first ten minutes than “Benjamin Button” does in it’s entirety. Sorry, Benjamin, but it’s true. If you’re looking for a deeply-felt story about genuine love, loss and redemption, skip the bloated Brad Pitt-fest and see this instead!

Playing a battered and bruised pro-wrestler well past his prime, Mickey Rourke gives the performance of his life as Randy “The Ram” Robinson. Several critics have pointed out how Rourke’s real-life struggles and appearance give the movie an added heft, and that may be true, but I think that totally sells Rourke short.

I mean, sure, he looks like hell, but Rourke is not playing himself here, this is acting. And acting of the caliber I haven’t seen onscreen since, well, shit…I can’t even remember it’s been so long. Seriously, Rourke is so vital and alive in this movie that you’ll swear you’re watching a documentary. 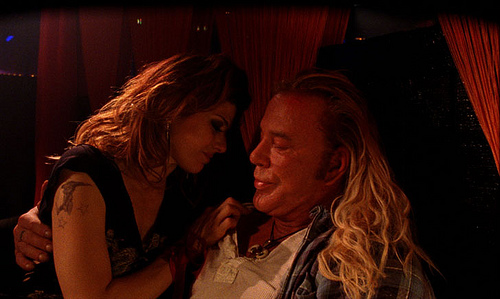 And the story…wow…I won’t ruin it for those of you who haven’t seen it, but this movie takes off in directions I never saw coming and never looks back. And lest you think “The Wrestler” is all about Rourke, the supporting women in this film kick some serious ass!

Marissa Tomei has never looked hotter — literally, she has some full-blown stripping scenes that are beyond realistic! — and her performance as a damaged stripper is so naturalistic that you’ll swear she’s been pole dancing her entire life. I know a lot of people still give her shit for winning the Oscar for “My Cousin Vinny”, but if there were any doubts about Tomei being a real actress, this movie will put them to rest forever.

Beneath all the sweat and the shimmery body paint, Tomei’s character not only gives Rourke something truly powerful to play off, but also steals your heart in every scene she’s in. Seriously, she’s incredible. 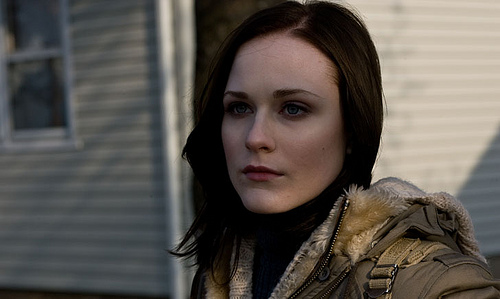 And Evan Rachel Wood — who we adored on the vastly underrated “Once and Again” — delivers her most mature, nuanced performance to date as Rourke’s estranged daughter. Her scenes with Rourke will rip your heart out. Man alive, I was weeping like a baby a couple of times…beautiful stuff!

And when that Bruce Springsteen song kicks in at the end, holy crap, you just wanna die. This ain’t no tacked-on end credits song, this is a sad-ass rock ballad for the ages…and like the movie itself, it will stay with you for days. Amazing…