Located just around the corner from the Cinerama Dome, the Cabana Club on Ivar has a really cool “old Hollywood” vibe that I kinda love. There’s a little swimming pool-like water running through the place, bridges to the bar, and crazy cool cabanas everywhere you look. I swear to God, this joint is so retro, you half expect to see Louis B. Mayer boozing it up Errol Flynn in the corner. 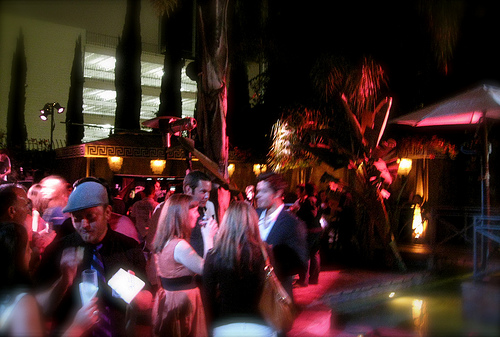 Christine and I had been here once before, for the WGA’s post-strike “Contract Celebration Party” in March, but obviously, this party was a lot more fun. And unlike the WGA bash where the bar was only halfway “open”, on Monday night, the free drinks were flowing freely, amigos!

And though most of the food was delicious, I’d have to say the highlights were the “American Mall” cookies and the Ben & Jerry’s booth — there is a Ben & Jerry’s ice cream cart prominently featured in the movie — that came stocked with five yummy flavors of ice cream. 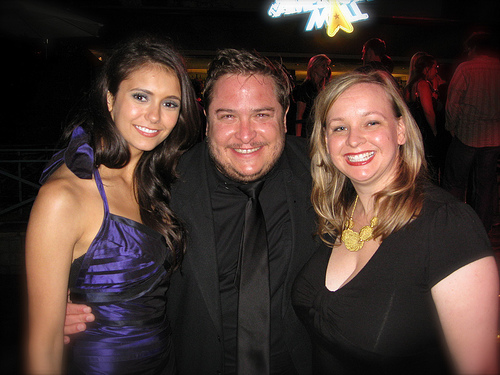 There was also a hugely popular Sears Arrive Lounge photo booth near the dance floor (we took two sets of pics) and an area where people could spread out and play MTV’s hit video game “Rock Band” — which is also featured kinda prominently in my movie. I know, I know…product placement much? But, hello, this movie is set in a mall…so, what better place to, um, place some products?

Ooo, speaking of branding. I know they probably do this at all the Hollywood premieres, but another thing I totally loved was the fact that they slapped “The American Mall” logo on EVERYTHING. Napkins, the food trays, cookies, a super cool neon sign over the bar, hell, even the wait staff and bartenders wore “American Mall” t-shirts. It was awesome! 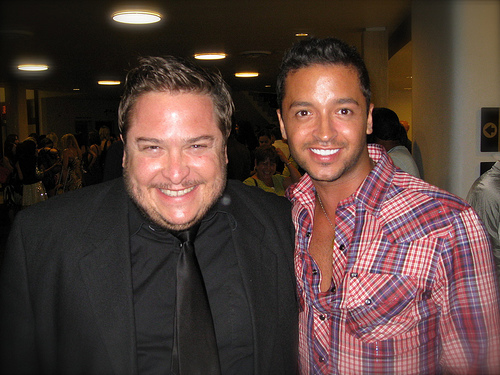 But the highlight of the evening was really just chilling with the cast and crew from the movie. I had met all of the core cast members when I visited the set in Utah back in February, but Christine was meeting them all for the first time and had a blast. Everyone — and I mean everyone — both in front of and behind the camera was crazy nice! Seriously, it was like old home week…

I’m sure you’ll recognize some of the more famous guests at the party — Jai Rodriguez from “Queer Eye For The Straight Guy” told me he loved the movie as did the super cool African-American chick from “High School Musical”, Monique Coleman — but, mark my words, the rest of the “Mall” cast is gonna be huge. And they deserve it, because, in my totally unbiased opinion, they really rocked that mall hard, baby. 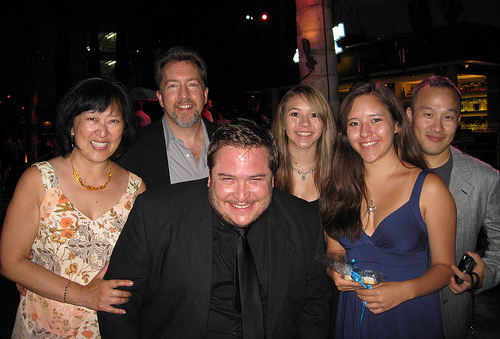 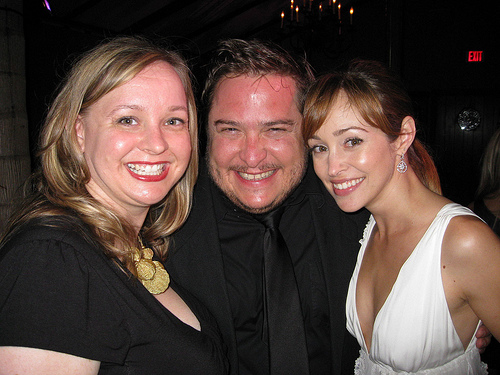 So with Christine’s feet ready to fall off — those heels were high, yo! — we stumbled back to our car just before midnight and hurried home to open our gift bags! Sadly, no “Rock Band”, but we did get some cool guitar string bracelets like the one the Ally character wears in the movie, “American Mall” t-shirts, stickers, a CD of the soundtrack and loads of Clean and Clear products…so, hey, not a bad way to end the night.

Now, if you’ll excuse me, I have to rinse off my new deep-cleansing acne mask and go to bed. Que viva la Mall!