Founder of Jedi Church banned from store for wearing hood!

Just when we thought religious discrimination was a thing of the past, the UK press is reporting that one of the founders of the International Church of Jediism, Daniel Morgan Jones (23), was forcibly ejected from a Tesco supermarket in North Wales for refusing to remove his hood — which he wears at all time for religious reasons — while shopping.

According to Jones, who also goes by his Jedi name, Morda Hehol, the Jedi doctrine explicitly states that a Jedi Knight “must wear a hood up in any public place of a large audience.” I don’t know how large the “audience” was at that grocery store, but Jones claims that Tesco security violated his “religious rights” by asking him to remove his hood.

Making matters even worse was the fact that a Muslim woman in a veil was allowed to shop freely while Jones was shown the door. “I walked past a Muslim lady in a veil…surely the same rules should apply to everyone” Jones griped later.

Still reeling from the experience, Jones is considering legal action, but in the meantime advises other UK Jedi to boycott Tesco stores, hoping to make the grocery chain “feel the Force“. OMG, so awesome! 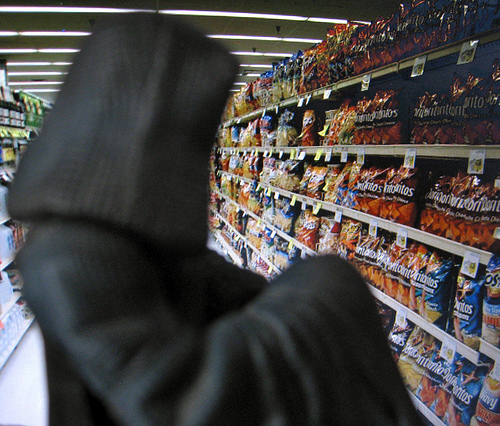 But the real kicker here was the reaction from Tesco’s corporate office. Responding to the Jedi dust up this afternoon, Tesco released a statement saying, and I quote: “He hasn’t been banned. Jedis are very welcome to shop in our stores although we would ask them to remove their hoods. Obi-Wan Kenobi, Yoda and Luke Skywalker all appeared hoodless without ever going over to the Dark Side and we are only aware of the Emperor as one who never removed his hood.” Ooo, snap! Take that Morda Hehol!

Funnier still was Tesco’s closing statement: “If Jedi walk around our stores with their hoods on, they’ll miss lots of special offers.” Ha! Hilarious! Break out my Anakin costume, sweetie, we’re going to Tesco!