I know there might be some haters out there who think this movie looks kinda lame, but let me tell ya, “The House Bunny” is one of the funniest, sweetest comedies I’ve seen in years. A candy-colored gem of a movie headlined by Anna Faris in a truly star-making role, “Bunny” is so funny that you actually miss some of the dialog from laughing so hard. Really!

And with a script this witty and fun, you don’t want to miss a word. I kid you not, amigos, you will be howling with laughter at some of this stuff.

And though some critics have slammed it as a female “Revenge of the Nerds”, as a serious fan of good college comedies, I actually think that is a huge compliment. For like “Nerds”, there is a sweetness beneath the laughs here that really elevates the material way beyond the typical frat/sorority house comedy.

Written by Karen McCullah Lutz and Kirsten Smith — the team that brought us “Legally Blonde” and the vastly underrated “10 Things I Hate About You” — and produced by Adam Sandler’s Happy Madison shingle, the movie is such giddy fun that the minute it ended, we wanted to see it again. 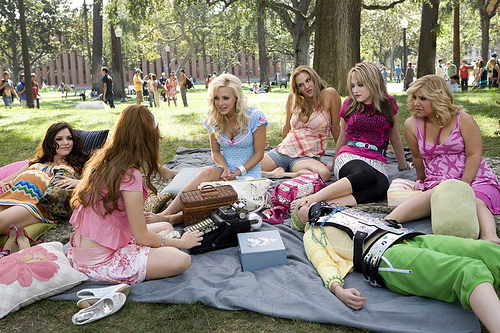 Seriously, I haven’t felt that way about a mainstream Hollywood comedy since “Knocked Up”. And though I waited a few days to buy that when it came out, I promise you, I will be first in line at Target when “Bunny” hits DVD!

Channeling Marilyn Monroe at the peak of her comedic skills, Anna Faris is not only hysterical, but also, like Marilyn in her best roles, almost heartbreakingly sweet. Playing a former Playmate tossed out of the Playboy Mansion on the day after her 27th birthday, Faris finds new meaning and her true calling by helping a group of misfit girls save their crumbling sorority house.

I know that sounds like a pretty basic premise, but, trust me, “Bunny” — mostly due to Faris’ sparkling presence — is anything but ordinary. And though she has lit up the screen with some kick-ass comedic performances in the past, this is the kind of role that will make Anna Faris a household name.

And with Reese Witherspoon long having moved on to boring, more so-called “serious” fare, the possibilities for our girl Faris are endless! So, go, Anna!

Of course, as fantastic as Faris is, the movie wouldn’t be complete without the amazing supporting cast, all of whom shine here. Colin Hanks, Christopher McDonald and Beverly D’Angelo (as the aptly named Ms. Hagstrom) all seriously rock, but the sorority girls at the loser house that Faris champions are incredible.

I had never seen Emma Stone and Kat Dennings in a movie before, but they are both spectacular. And I think the biggest surprise for me wasn’t that Rumer Willis can act — because she really can, and she is hilarious! — but that “American Idol” finalist Katherine McPhee can too. 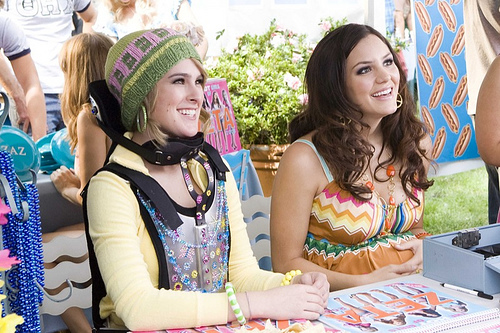 Playing the pregnant sorority girl constantly eating from a jar of peanut butter, McPhee is a natural comedienne. The scene of her squeegeeing her pregnant belly at the car wash is already a classic, and watching her sing a horribly off-key karaoke version of “Like A Virgin” in a bar will have any longtime “Idol” fan rolling on the floor with laughter.

I should also let you know, that I absolutely loathed McPhee on “Idol” and was prepared to do the same here, but she won me over in a big way. I guess you could say that I finally caught the McPheever! Go, Katherine!

Oh, and speaking of singers…Tyson Ritter, lead singer of one of my favorite guilt-pleasure bands, The All-American Rejects, was also surprisingly good. Anyone who has ever seen one of their music videos knows that this dude has charisma, but the fact that he can back up that charm with some pretty decent acting chops is a pleasant surprise. And the goofy chemistry he shares with Stone in their scenes together is perfect. Really fun stuff! 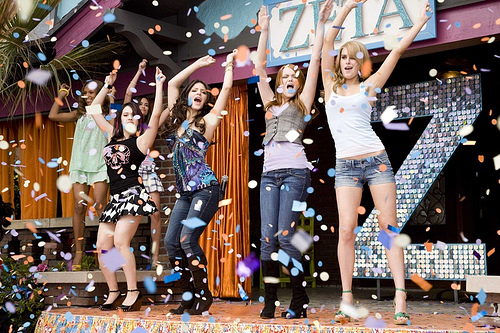 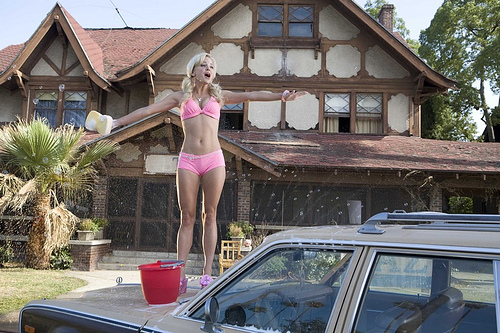 So, if you’re looking for some sweet, frothy Hollywood comedy done right, check out “The House Bunny”. Who knows, if you see the movie in Burbank, we just might be sitting next to you…yep, it’s that good.