OK, if you read my last post, you have some idea of how much Christine and I love Christmas music — at last count we had upwards of 50 Christmas CD’s in our collection! — and as far as holiday tunes go, the cheesier the song, the better!

And our favorite cheesy Christmas song ever is the crazy-sad “The Christmas Shoes” by NewSong. If you haven’t heard the song, it hinges on a little boy meeting up with a stranger at a department store on Christmas eve. The boy is trying to buy some shiny Christmas shoes for his dying mother, who has hours to live, so that she looks pretty when she meets Jesus later that night in heaven. I know…sad, huh? Well, grab some Kleenex, amigos, because it gets way better… 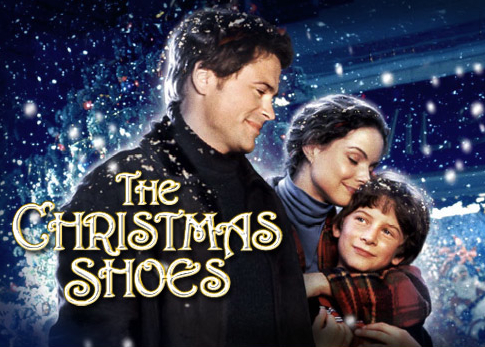 So, the kid is paying for the shoes when he realizes he doesn’t have enough money. At this point in the song, a choir of angelic children’s voices chime in as the boy asks the stranger in line behind him if he can borrow some money to buy the shoes. His heart breaking, the stranger ponies up the cash and the boy hurries off to give the shoes to his Mom.

Now, if you’re not crying by the end of this song, well, maybe you just don’t cry. But, as far as Christine and I are concerned…bring on the waterworks! Seriously, we tear up every time it plays on KOST, and they play that thing day and night during the holidays, so we do a lot of weeping around here.

Anyway, while we have been huge fans of the song for a couple of years now, Christine and I recently learned that there was a CBS TV movie made from the song back in 2002. And when we heard that our favorite TV movie hambones, Rob Lowe and Kimberly Williams were the stars, well, how could we miss it?

So, last week we finally caught the movie on Lifetime, and, well, let’s just say it pales in comparison to the song. I mean, Rob Lowe is OK and a wheezing, coughing Kimberly Williams acts her pretty little heart out beneath a ton of “sick lady” make-up, but the rest of the cast is downright awful.

Peppered with a C-level supporting cast — apparently the producers blew all their cash on Lowe and Williams — the movie is painfully bad, even by Lifetime movie standards. Our Tivo missed the first hour of the movie, but since all we were concerned with was seeing the song brought vividly to life onscreen, and that all happened at the end, we were cool.

But, wow, the way they dramatized the song was just plain lame. I mean, God bless him, Rob Lowe tries him damnedest to give his lifeless, boring character some flava, but the boy playing Williams’ kid is one lousy little actor. Sorry, but, man alive, I can cry better on cue than that kid! Yikes…

The real kicker to the climactic scene, however, is the actor playing the department store cashier. This dude is so mean to the little boy that it almost ruins the good memory of the song. I mean, hello, I don’t remember any lyrics about the cashier being a prick! But in the movie, he belittles the kid — actually barking out the words: “Do I stutter?” when the kid asks him to repeat the price — for not having enough money and then tells him to come back after Christmas when “We’ll be giving [the shoes] away”. Huh? I know he didn’t just make fun of that boy’s dying momma shoes! Mean!

I think our biggest complaint, however, was the fact that they didn’t play the song nearly enough for our tastes. The song is the reason the movie was made, and a few wimpy refrains here or there is not enough, man. If I was directing that thing, that song would be all over the last few minutes of the movie.

Of course, we both still totally cried when the boy slipped the shoes on Williams’ giant feet — no kidding, that chick has clown feet, they’re huge! — but, overall, this movie sucked big time. Shockingly, CBS actually made a sequel in 2005 entitled “The Chistmas Blessing”. Wow…who knew?

In the sequel, Neil Patrick Harris plays the now-adult kid and Rob Lowe reprises his role as the money-lender with the Christmas spirit. Normally, we’d be all over that shit, but, having suffered through the first movie, I don’t know if we can stomach a sequel…sorry, Doogie.

So, if you’re craving some weepy, classic holiday cheese this season, I’d say stick to “The Christmas Shoes” song instead. Or better yet, check out “The Christmas Shoes” music video here. Using footage from the movie, the video is the perfect way to experience this song in all it’s awesomely sad glory. Enjoy!