Every year around this time, Christine and I head out in search of cool amateur haunted houses in the valley to explore. But this year, with our own little pumpkin on the way, Christine opted out of our tradition for fear of being bumped, pushed or just plain scared to high heaven along the way.

So, instead of going the local, down and dirty haunted house route, we decided to explore something a little more organized and fair-like this year. That way Christine could chill with some cotton candy while Ryan, Laura, our friends Patty and Mike and I screamed our lungs out in the haunted house. 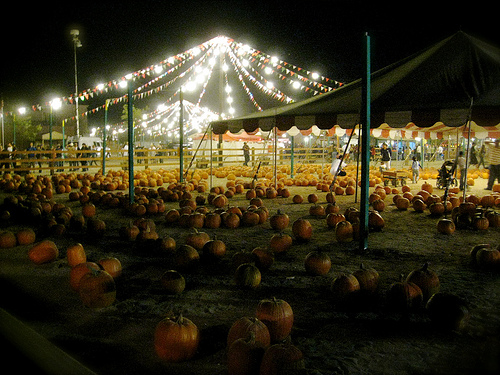 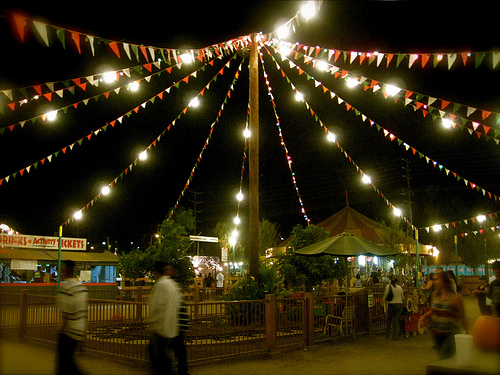 And after many years of hearing about it, we finally schlepped out to Woodland Hills for the annual Halloween Harvest Festival at Pierce College. We had heard before that this place had one of the scariest “pay” haunted houses in the area, but when we learned that they also have a haunted corn maze on the premises, well, we were sold!

I’d never been to Pierce College before, but that place is way out of the way…I’m talking barely in L.A. county. And the campus is positively massive, with acres of corn fields, pumpkin patches and other assorted growing spaces dedicated to the school’s renowned Agricultural Department. I gotta say, the sheer volume of land out there was insane, you kinda felt like you were in another state or something…

But the coolest part is that if you park in the far lot, you get to enjoy a free tractor-pulled hayride through the fields to the festival grounds! Cool, huh? Even Christine, a hayride aficionado from way back, was impressed…although she was quick to point out that the bales we were sitting on were comprised of straw, not hay as we first surmised. They don’t call her Farmer’s Daughter for nothing, yo!

Anyway, aside from tons of what we think were free pumpkins and a petting zoo — which is only open during the day — the Harvest Festival is also home to some of the finest fair food we’ve had since, well, last year’s visit to the L.A. County Fair. Giant turkey legs, kettle corn, funnel cakes, you name it, they had it. 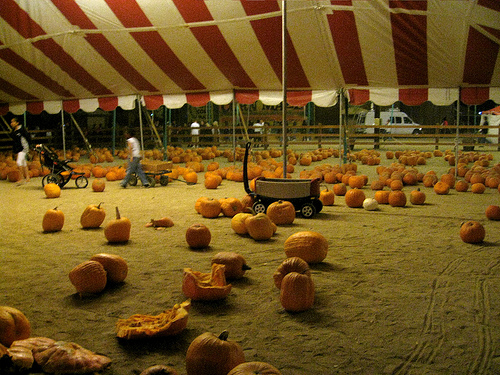 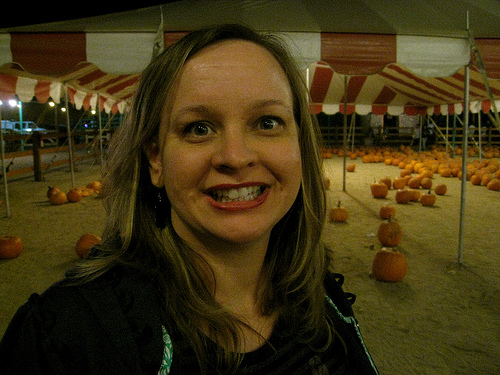 Of course, being the girlie man that I am, I wanted to hit the haunted house and corn maze before eating, you know, just in case I threw up or something. So, while Christine chilled with her cotton candy, Ryan, Laura, Mike, Patty and myself headed into the daunting haunted house.

And…Oh. My. God. Was it scary!! I clung to Ryan’s jacket with my eyes closed almost the entire time, and halfway through, as we passed an emergency exit, Patty got so scared that she actually burst into tears and left. I wasn’t crying, but man, how I wanted to! So, I took off with Patty and Laura while Ryan and Mike finished the tour alone. Yes, I left with the girls…sue me.

For anyone out there keeping track, I should also note that this haunted house is not nearly as scary as the bone-chilling “Shipwrecked” event they have every year at the Queen Mary, but it was a pretty close second.

It’s not that the scares were that original or anything, but the looks on some of the people’s faces in there were downright murderous. These are not your garden variety haunted house workers, amigos…even without their make-up, these carnie folks looked and acted, well, dangerous. Seriously…we checked our wallets when we came out! 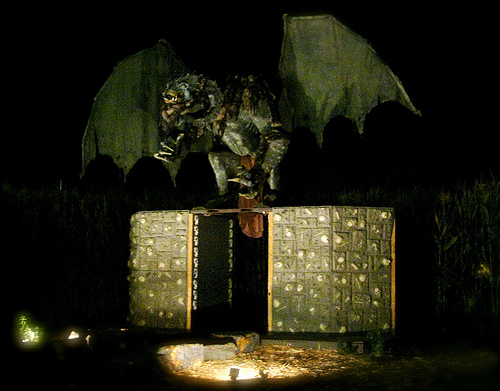 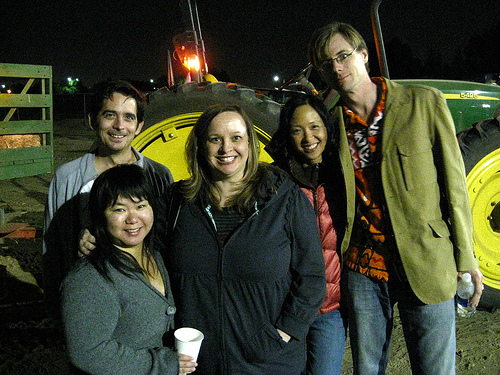 And then, since we had paid for both the house and the corn maze (and I am loathe to ever not get my money’s worth!) we hit the haunted corn maze out front. That horrifying winged beast in the picture above acts as kind of the maze’s gatekeeper, and when he is moving and screeching, well…you kinda want to wet yourself. I’m not kidding, he was freaky!

But the maze itself was actually quite cool. Instead of picking on me — as the ghosts and goblins did in the haunted house — they fixated on Ryan this time, so my journey on his coattails was actually pretty scare-free. Don’t get me wrong, the maze was still very creepy and totally long — someone said it winds almost a mile and a half through that dark-ass corn field! — but it was more cool creepy than, you know, crap your pants creepy.

So, if you opt for the Multi-Pass Ticket, which is $20 (versus $13 for just one haunted area) I’d suggest you hit the haunted house first, then catch your breath in the corn maze. And then, and only then, hit the fair food!

Like I said before, they have all kinds of crazy-good food and all of it was awesome and totally cheap, but I think the highlight of the Festival were the fresh-cooked donuts pictured below. Fried to order, they were freaking amazing…and when you added a healthy dusting of powdered sugar, well, these were some donuts for the ages, man. Spectacular! 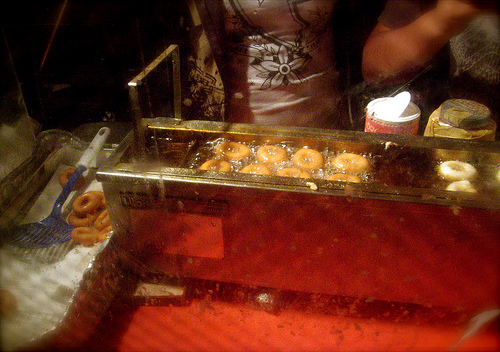 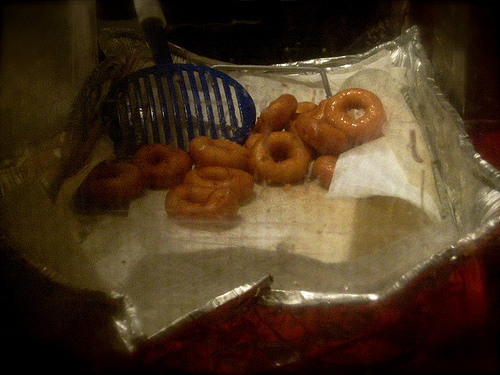 So, for those of you in the L.A. area who wanna get your scare on, or even just get your fried food on, head out to Pierce College tonight because the Halloween Harvest Festival ends Sunday, November 2nd.

And for the love of God, make sure and wear something grubby…we’re still scraping mud and straw off our damn shoes!