Breaking my long-standing rule about getting up early, I was second in line at Target on Tuesday morning to purchase the rocking new video game from LucasArts, “Star Wars: The Force Unleashed”.

Now, I know what you’re probably thinking: “Yikes..he’s blogging about “Star Wars” video games now? This dude gets nerdier by the minute…” And yes, I totally do. But that’s beside the point. 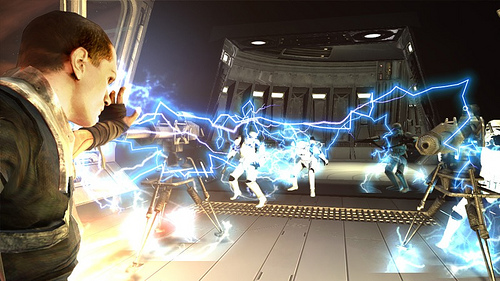 I’ve been looking forward to this game since my brother and I first saw, and were blown away by, some of the concept art at the Stars Wars Celebration IV last year. Yes, we went to that too and it rocked! The thing that we loved most about the concept of this game is that it acts as a bridge between the plotlines of the actual movies. Cool, huh?

Set during the time period between “Revenge of the Sith” and “A New Hope”, the game’s central playable character is Darth Vader’s Secret Apprentice who is recruited to the dark side to hunt down and kill any and all remaining Jedi Knights in the galaxy. Wow! It’s like Lucas and company have finally come up with a game that is just as dark and twisted as the movie’s coolest character, Lord Vader himself. Awesome!

And though I was, as I said above, second in line to purchase the game on Tuesday, I am probably the last in line to figure out how to play the damn thing. For though it looks and plays as cool, if not cooler than, some of the movies, this game is f-ing hard, man! 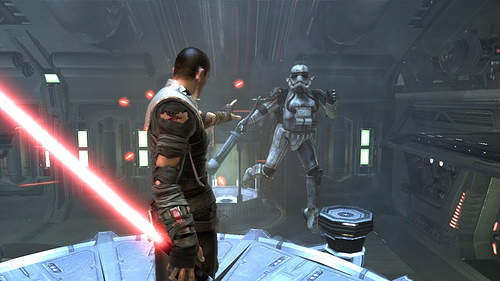 Chapter One begins with you playing Darth Vader — which, if you ask me, is not a bad way to start — and has you charging around Chewbacca’s crazy-cool homeworld of Kashyyyk in search of a rogue Jedi Knight. Sounds easy enough, right? Well, not really.

See, killing the wookies is easy and the force unleashed powers are pretty spectacularly rendered, but once you meet up with that crafty rogue Jedi — who I’m assuming is also the Secret Apprentice you will play as for the rest of the game — things get real hard real fast!

I should say here that I am not a pro gamer by anyone’s standard, and since Christine was off baking cookies while I played, it was just me and my Wii remote flailing and cussing up a storm in the living room. I was getting better by the end, but man, getting that damn Jedi to surrender to the dark side was way harder than it looks on the box, amigos.

So, for now, I’m gonna bone up a bit on the game — who knows, I might actually read the instructions this time! — and try playing again this weekend with a group. Between the four of us eggheads — Ryan, Laura, Christine and myself — we should be able to at least advance to the next level…I hope.

In the meantime, check out the rocking trailer for the game here and if you pick up a copy of “The Force Unleashed” for yourself, please call me and tell me how to play the damn thing! Seriously, I’m dying here…