Woke up this morning at 5:30am to the sound of several loud pops, like someone slamming their car door shut over and over again. Figured it was the Times’ delivery dude making his usual racket, and though I was tempted, I somehow resisted the urge to throw open the window and bitch him out.

Then, a few minutes later, I heard helicopters. Circling. Overhead. Forever! I’m not kidding, it sounded like they were landing in our front yard. Realizing that the last few hours of my Sunday slumber were completely shot, I opened the blinds to see massive plumes of dark smoke swirling skyward.

In my groggy state, I actually entertained the notion that my “Lost” obsession had really gone too far this time and that the island’s black smoke monster was coming to take me home. But NBC4’s trusty Ted Chen quickly put those concerns to rest when he reported that a massive fire (of unknown origin) was roaring through the Universal Studio’s backlot. 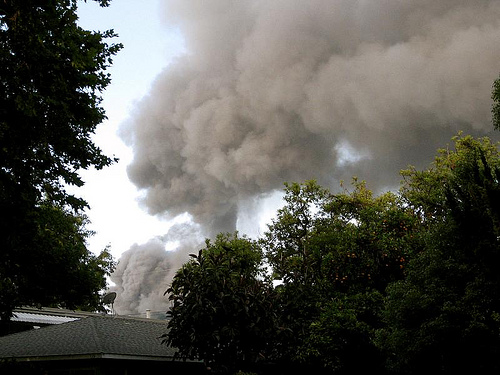 And the footage he showed was insane! Flames and red hot ash shooting into the air at Universal City — which is like, minutes from our place — it looked like a Goddamn volcano! And it smelled — and continues to smell — like what it really was, burning sets, props and scads of videotapes from the Universal vault.

I know it’s terrible, but at least that big old fire on Barham last year smelled organic, you know, like trees and shit. Everywhere we went in Burbank this morning — still looking for that elusive Wii Fit — smelled like burnt plastic. And with no wind in sight, I think it’s gonna stay that way…

According to Ted Chen — who referred to the Universal-backlot-shot “Bruce Almighty” as a “classic” in his frantic, man-on-the-scene reportage this morning — the Universal videotape vault is completely backed up elsewhere, so nothing truly valuable is gone forever. That goes double for the film archive, which was nowhere near the fire. So, whew…

But, man alive, that backlot tram tour is gonna be real short ride in the next few months. With almost all of New York Street and the “Back to the Future” town square set leveled, the aerial shots look like a war zone.

Seriously, that backlot is totaled. And with the fire contained, but smoke still billowing skyward as I type, I don’t imagine there will be much to salvage anywhere on that lower lot.

But there is some good news in all this…according to the last thing I heard from my boy Ted, the MTV Movie Awards will still be taping live tonight from the Gibson Amphitheater at Universal, and despite the fact that the “King Kong” attraction was burnt to the ground, the theme park will be open for business as usual today starting at noon.

Hooray! Nothing says summer theme park fun like riding “Jurrasic Park: The Ride” with a damp towel clutched to your nose and mouth the whole time.

So, while we desperately try and make up for lost sleep — the fire is over, go home helicopters! — wanted to thank the firefighters for putting that thing out hella fast, Universal Studios Theme Park for bravely keeping your doors open to tourists (even during the worst of times!), and most of all, thank you, Ted Chen for making this morning’s chaos so, well…classic!