If I haven’t found time to head over to McDonald’s to take advantage of their sweet-ass freebies this past couple of Mondays, then you know I ain’t gonna get up early to get me a free pastry at Starbucks either.

But, just in case some of you early birds are up and about in time mañana, you should know that the beleaguered brewers from Seattle are offering up a free pastry to anyone who orders a drink (including, I think, brewed coffee) between the time that they open in the morning and 10:30AM. Not bad, huh?

I mean, hey, if you’re going to Starbucks anyway, why not partake in a little recession-friendly freebie? So, though Greta and I will probably just be rolling outta bed (and crib/co-sleeper) when this deal expires, here’s hoping some of you get your free scone on big time!

Oh yeah, and I think you might need a coupon, so, make sure and download one here before you head out in the morning. Enjoy!

Just found out from one of our regular tipsters (thanks, Aunt Debbie!) that McDonald’s is offering free McCafé Mochas between the hours of 7:00AM and 7:00PM every Monday until August 3rd! Cool, huh?

Don’t know if you’ve had the chance to try this new line of fancy coffee drinks at McDonald’s yet, but Christine and I were first in line when they launched them back in May. And though the Caramel latte she had was downright hideous — I don’t know if it was the cheap caramel or what, but that thing SUCKED! — the iced Mocha I had was pretty damn good. 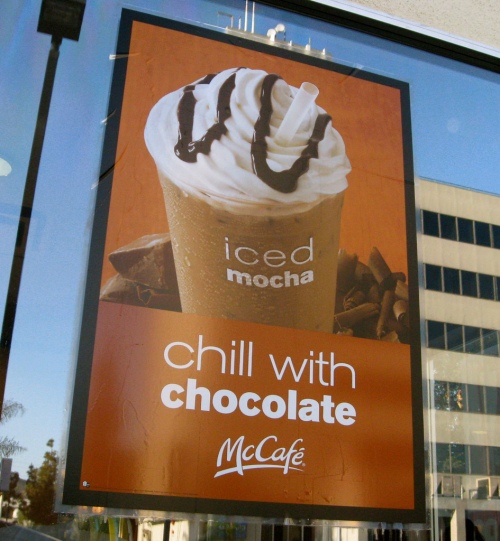 And when some freebie coupons came our way a week or so later, we tried some more of the McCafé drinks and were both very pleasantly surprised by how tasty they were for the price. It’s not Starbucks or anything, but they do pack a wallop in the caffeinated department and they are way cheaper than almost anything else on the market…so, I say try them out at least once.

And with Free Mocha Mondays for the rest of the month, how can you not try these drinks out? I haven’t sampled the hot mocha yet, but I can tell you from personal experience that the two iced mochas I’ve had have been kinda magical. So, I’d go cold on this one, amigos. Or, if you really wanna get your freebie on, go cold for breakfast and then head back later and go hot just before dinner…either way, you gotta try these things!

Oh yeah, and just to give you a heads up, the free version of the Mocha is served in an 8 ounce cup, not the usual 12 ounce. Just wanted to let you know so you don’t bitch out your McBarista when you get a small-ass cup.

Dying to hear what y’all think of the drinks, so, as usual, McComment away!