Whoa…could this summer get any cooler? I just got an email from my friends at Elvis.com announcing the upcoming launch of a super cute Mr. Potato Head Elvis! Yay, now my Darth Tater won’t be so lonely.

Introduced to the world by a rocking Elvis tribute artist in a sparkly Elvis jumpsuit, Mr. Potato Head Elvis’ debut is timed to coincide with Elvis Week 2010 and will be followed at Christmas time by a ’68 Comeback Special version in black leather! Whew, now I finally know what to ask Santa for! 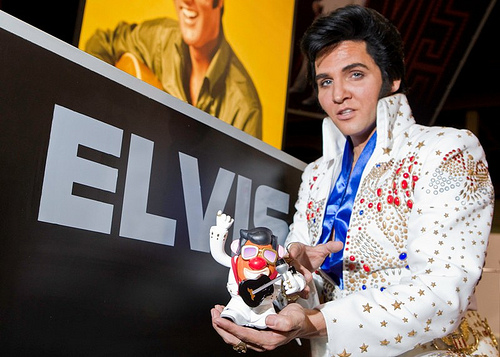 A sad day in Memphis…

Today marks the 31st anniversary of the death of Elvis Presley. And though we didn’t get to travel to Memphis this year for Elvis Week, Christine and I did sign up for a free three-day membership to Sirius Radio so we could listen to the live broadcast of the candlelight vigil last night from Graceland.

And let me tell ya, not a dry eye in our living room. I know it sounds crazy, but that candlelight vigil is way up there on our list of life-changing events. It was just beautiful, and even hearing it on the internet feed this year was awesome.

Not only could you hear the crowd singing along with the music on Elvis Presley Blvd., but they also took some time to interview fans, friends and even an ex-girlfriend of The King as well. Touching stuff, baby!

And since no Elvis Week celebration would be complete without some major Elvis announcements, this year’s celebration has two really cool Elvis-related surprises up their sleeve.

One, is the upcoming release of Elvis Presley’s first duets album, “Christmas Duets” featuring current stars like Carrie Underwood, Martina McBride and Anne Murray — whose own Christmas album is one of our favorites! — singing along with Elvis’ old tracks. Hmmm…normally, I frown on this kind of thing, but hello, it’s Elvis. So it could be either really cool or really creepy. I’m hoping for more cool than creepy, but you never know… 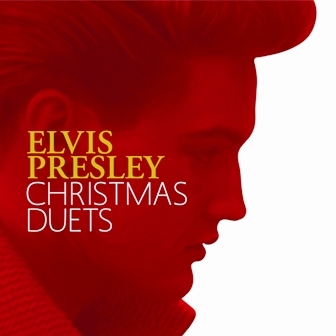 And the other major announcement from Elvis Presley Enterprises is the upcoming release of a Graceland-approved Elvis and Priscilla Wedding Day Barbie set. Holy crap! Could anything be cooler than that? Two words: Amazon wish list. Actually, I think that’s three words…

In any case, just glad to have some new Elvis stuff to buy in the months to come. And with Lisa Marie rumored to be expecting twins sometime soon — bringing the grand total of Elvis grandkids to four! — wow…this really is a good week to be an Elvis fan. Long live “The King”!

Filed under Do, Hear