OK…I know we’ve only seen like three of this year’s big award-season contenders (“Toy Story 3”, “Hereafter” and “The Social Network”, which were all awesome, by the way) and therefore, we probably shouldn’t be making any broad, sweeping predictions yet, but, mark my words, amigos, Christopher Nolan will win an Oscar for “Inception”.

Whether it’s for writing, directing or producing is still to be determined, but, the mad genius behind “Memento”, “The Prestige” and the Christian Bale “Batman” movies has really outdone himself with “Inception”, and for that reason alone, I see many gold statues in Nolan’s future. And boy does he deserve them!

Taut, suspenseful, positively gorgeous to look at, and populated by the coolest indie cast this side of Sundance, “Inception” is the best movie we’ve seen this year. Yep, I said it, the best. Of course, most of you probably already know this since you saw the movie when it came out, you know, last summer.

But, babysitters being increasingly hard to come by, Christine and I didn’t get to see “Inception” on the big screen until last week at Warner Brothers and lemme tell ya, it blew us away. To say that our heads were swimming (in the best way!) for days afterwards is a serious understatement.

This was no mere movie, amigos, it was total immersion in a completely original and boldly realized new world. And we loved every crazy second of it!

I know I geek out over things a lot, and tend to overhype stuff that I really love, but, I kid you not, I haven’t felt this way about a sci-fi movie since we saw the first “Matrix” or “Terminator” flick way back when.

The dazzling technical elements aside, “Inception” is that rare breed of totally game-changing screen stories that will inspire whole generations of nerdy kids to wanna make movies. For me, it was “Star Wars”, for Generation Whatever, it’ll be Christopher Nolan’s “Inception”. Again, mark my words. 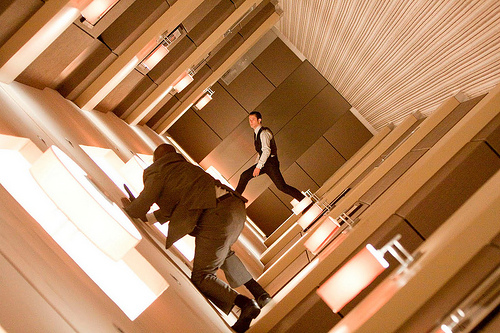 Anyway, I don’t wanna give anything away by going too much into the plot or anything, but, trust me, you don’t have to love sci-fi or even Leo DiCaprio to love this mind-bending little jewel of a movie. Simply put, if you like movies, “Inception” will knock you flat on your movie-loving ass. You have never seen anything like it. EVER.

So, you best get busy on that acceptance speech, Mr. Nolan. The clock is ticking…