Yesterday was Elvis Presley’s birthday, and keeping with a tradition we started last year, Christine and I celebrated what would have been The King’s 74th birthday with some sweet Yummy Cupcakes! Yee-haw! 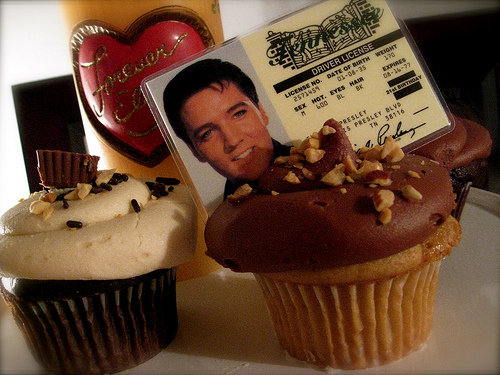 Last year, we were kind of bummed that Yummy Cupcakes didn’t feature their rocking Elvis cupcake on his actual birthday — they missed it by like, two or three days — and we told them so. Well, I guess the power’s that be made note of his actual birthday this year, because, lo and behold, guess which special cupcake they featured yesterday afternoon? You got it, the Elvis cupcake!

A sugar coma-inducing blend of peanut butter cake and chocolate/banana buttercream frosting, this cupcake was so sweet, and so totally Elvis that we were both kind of blown away. It was so rich, in fact, that we actually had to cut the sweetness with vanilla ice cream, something I’m sure Mr. Presley would have heartily approved of.

I think he also would have dug the other two cupcakes we purchased in his honor…a very tasty Chocolate Raspberry number with chocolate frosting and a raspberry filling and our old standby — and my Stepmom Wendy’s favorite! — the Peanut Butter Cup cupcake! If you haven’t tried it yet, get thee to Yummy, amigos, because this cupcake rocks!

The Peanut Butter Cup cupcake consists of chocolate cake topped with vanilla frosting, chocolate and peanut butter sprinkles and a wedge of an actual peanut butter cup on top…but the secret to it’s success is a dollop of peanut butter filling inside the cake itself. Man alive, Elvis would have loved that shit…amazing!

So, as we blow out our Graceland “Forever Elvis” candle one more time…we wish the King nothing but love on his big day. Happy Birthday, dude, we’re already counting the days till your 75th…