The sun setting over Graceland, we enjoyed the remarkably good Elvis “tribute artists” in the plaza — practically all of whom were non-native English speakers! — and mingled with the crowd of super cool Elvis look alikes. My favorites were the late-Elvis super fan couple pictured below.

This dude was so devoted that he was braving the crowds and the heat (in costume!) while toting an oxygen tank!

Unfortunately, he disconnected from his tank for the picture, but he was really cool and when I asked his wife if she was hot in that plastic wig she had on, she answered: “Yeah, but it’s for the King.” Awesome!

Christine loved the Chris-Isaak-ish Italian Elvis (pictured above) and then just before I snapped the pic, that old grizzled Elvis in the blue jumpsuit appeared. Wow, two Presleys for the price of one!

Snuggled up behind the girls in the next pic was the best singer of the bunch, another Italian Elvis who really rocked the tent! 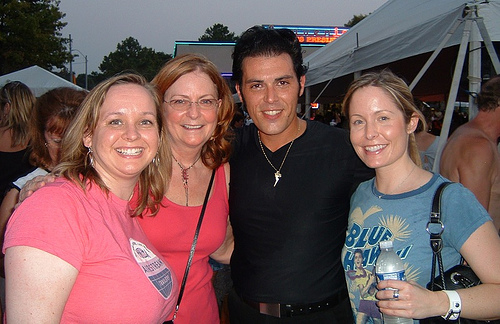 But I think our favorite guy there was the Indian Elvis (not pictured) who kept checking his hair in a mirror. Hilarious!

Despite the withering heat — Courtney and Mom tried to sit down on the curb and actually burned their butts! Seriously! — we were enjoying the Elvis parade in the plaza and then, before we knew it, 8:15pm was upon us. The candlelight vigil, arguably the defining moment of Elvis Week 2007, was about to begin outside the mansion!

An annual event for years, the candlelight vigil begins at nightfall, on the eve of the King’s death on August 16th, 1977, with the closing of Elvis Presley Blvd. to thru traffic. Almost instantly, the street floods with candle-toting fans who gather around the gates for a series of speeches by specially-selected members of Elvis’ many international fan clubs.

The speeches were surprisingly moving but the kicker was when they started playing actual Elvis songs over the deluxe speakers on the lawn. I’m not kidding you, not a dry eye on the boulevard!

Lighting our candles — generously supplied for free at little tables all up and down the block — we held them over our heads and began to sing along.

Honestly, you haven’t lived till you’ve heard 75,000 weeping, candle-toting Elvis fans singing along to “If I Can Dream”. Probably one of the coolest things any of us has ever experienced…really, profoundly beautiful! 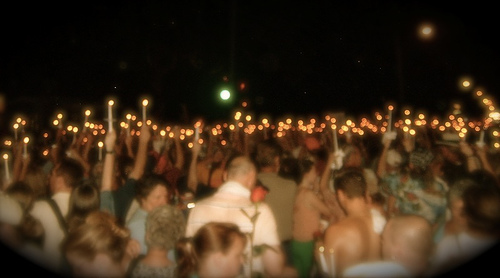 So, holding our candles high, we sang along through “Love Me Tender” and “The Wonder Of You” before finally succumbing to the heat — not to mention the frenzied emotion! — and making our way back to the car.

The vigil continued throughout the night with the snaking line outside the gates making their way onto the property to pay their respects at Elvis’ grave. We didn’t stay for that, but the sight of all those flickering candles in the rearview mirror as we drove off was really something to behold.

A fitting end to a truly amazing day at Graceland. Thank you, Elvis!