Christine and I had read about Rockabye Baby CD’s — which are basically lullaby versions of popular rock songs — a while back but it wasn’t until our friend Ginger got us the Coldplay album that we actually heard one in its entirety. And though the concept sounds a bit odd, I gotta tell ya, the music is really amazing…

Since we loved the Coldplay album so much, we quickly ordered two more of the Rockabye Baby CD’s on Amazon. 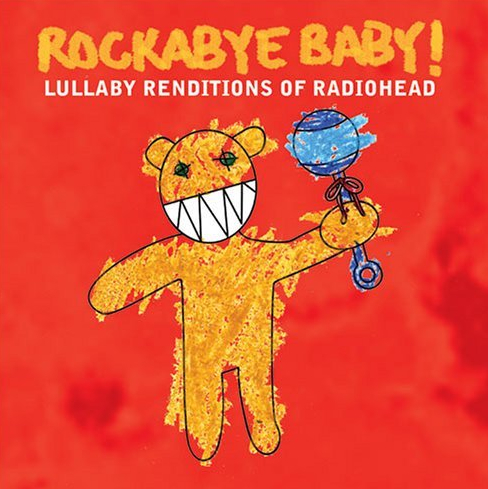 I picked the Rockabye Baby Radiohead album (which rocks!) and Christine chose Rockabye Baby The Smashing Pumpkins which positively soars. Seriously, the lullaby version of “Tonight, Tonight” left all three of us breathless. Actually, I don’t know if Greta was breathless from the music or from breastfeeding, but either way, she totally digs the tunes.

Radiohead seems to be here favorite right now — I did not coerce her, I swear! — but she loves all three of her Rockabye Baby CD’s so much that it’s practically all we play for her on the iPod.

And aside from sounding truly awesome, and hopefully introducing her to some rocking good jams before she discovers the unspeakable horrors of Miley Cyrus and the JoBros, the music puts her to sleep like nobody’s business…so, yay!

To sample some of the super cool Rockabye Baby music for yourself, visit their crazy-cute site here. And if you’re looking for a cool baby shower gift, look no further…because these CD’s kick some serious ass!