Tag Archives: “About a Boy”

As I’m sure you’ve gathered by now, Christine and I see lots of movies this time of year — at last count we’ve seen 16 since Halloween, crazy! — and though most of them are awesome and totally award-worthy, they are also almost uniformly serious. So, when we see a funny, well-made romantic comedy this time of year, they usually stand out…big time.

One such movie from year’s past was “Miss Congeniality” — which we still love, despite the constant heckling from our friend’s Matt and Wan — and this year’s stand-out is the sparkling romantic comedy, “Last Chance Harvey”. 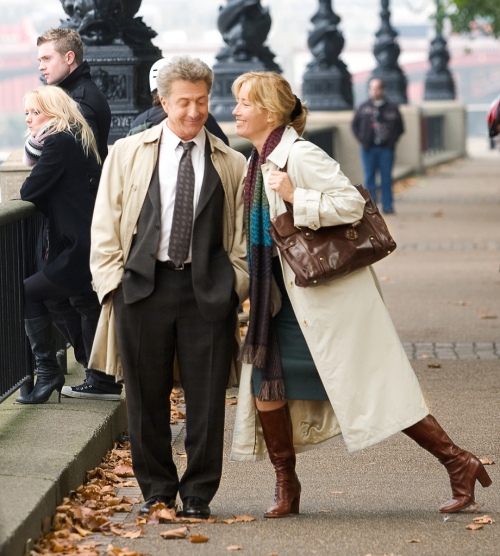 Starring Dustin Hoffman and a luminous Emma Thompson — seriously, beneath her frumpy, every-woman costumes, Thompson has star power to burn in this flick! — the bulk of “Last Chance Harvey” takes place over a 24-hour period in a beautifully-shot London, England.

I know it’s kind of cliche to say that “the city itself is a character” in a movie, but, I swear to God, London has never looked more vibrant and sunny than it does here. Even if you’re not big old UK geeks like us, this movie will make you want to visit London like never before. All burnished orange sunsets and crisp, yellow foliage, merry old England looks absolutely gorgeous here!

And the performances in “Harvey” are just as lovely and delicate as the setting. Playing two of the saddest, loneliest characters ever put to screen, Hoffman and Thompson are pitch-perfect as the star-crossed couple who “meet cute” and then spend the rest of the movie literally walking and talking around London.

I know, could be a total snoozefest, right? Well, trust me, it’s not. Working at the top of their game from a touching, often-hilarious script by director Joel Hopkins, the stars imbue every word they say with a depth and longing that is positively heartbreaking.

And that music…wow…the score, by composer Dickon Hinchcliffe, calls to mind the gloriously giddy work of Badly Drawn Boy’s killer “About a Boy” soundtrack. If you haven’t heard that score, or seen that movie, stop reading now and rent them both. Amazing!

But, back to “Harvey”. While on the surface it may sound like your classic boy-meets-girl romantic comedy, in reality what the filmmaker’s have crafted here is a wistful, Baby Boomer “Before Sunrise”. And if you knew how much Christine and I loved “Sunrise” and it’s arguably-better sequel “Before Sunset”, you know that is high praise indeed, amigos. Those movies were all about character and dialog and they made you laugh as much as they sometimes tore your heart out. Well, same thing goes for “Harvey”…this movie rocks!

So, if you’re looking for some holiday cheer this season, skip the bloated “Benjamin Button” and see “Last Chance Harvey” instead. You’ll laugh, you’ll cry and, hand to God, you’ll walk out of that theatre smiling…