My apologies for not posting news of this wondrous event in time for y’all to actually partake in said free 7-Eleven Slurpees, but, the good news is that once you read this post, you’ll know to look out for Free Slurpee Day 2011. So, yay!

Never heard of Free Slurpee Day? Well, until last week, neither had I. And I am a fairly regular consumer of Slurpees,  my usual being a mixture of Fanta Banana and Coke flavors. Anyway, this magical day is celebrated every year at participating 7-Eleven stores on July 11th. Seven-eleven…get it? 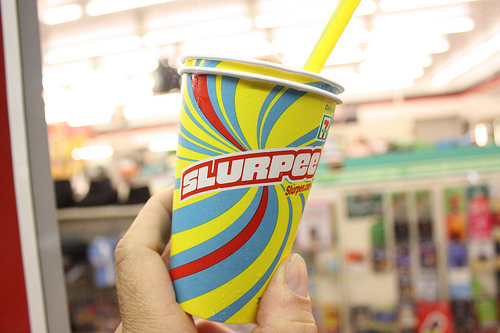 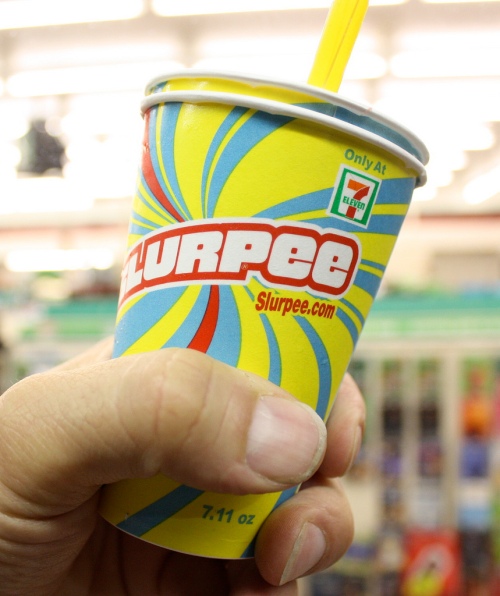 Cooler still is the fact that the free Slurpees come in cute-ass little cups that measure out to exactly, you guessed it…7.11 ounces. Awesome! The only problem we had is that the first 7-Eleven store we went (at Verdugo and Olive in Burbank) claimed to be out of free sized cups by the time we arrived? Huh?

We got even angrier when the dude behind the counter wouldn’t answer us when we asked him if they had any more free sized cups. He just stared into space ringing up customers. It was so weird. Luckily for us, my brother Ryan (who took the lovely pictures you see here) was there to cut through the bullshit.

Glaring at the dude from across the store, Ryan bellowed, as only he can bellow: “Oh really?! You’re out of free Slurpee cups on Free Slurpee day?!” I swear to God, I thought the cashier was gonna faint…he looked absolutely terrified. And two seconds later, we had four free sized cups in our hot little hands. Ha!

So, we filled our tiny cups a few times over then headed off to another 7-Eleven that was supposedly offering 50-cent hot dogs as well! Yee-haw!

That 7-Eleven (which is now officially our favorite in Burbank) is located at the corner of Hollywood Way and Burbank and was far more festive with all kinds of banners and balloons and shit in the store.

But even though they were much more forthcoming with the free sized Slurpee cups, they were totally out of 50-cent hot dogs, which kinda sucked. That said, the cashier there was the nicest 7-Eleven clerk in the world and even had a big old plate of free sliced fruit at his register, so…we left smiling!