Battle of the L.A. Craft Fairs!

Wow, talk about an embarrassment of hipster-holiday-shopping riches! This weekend, December 11th & 12th, Los Angeles will be home to not one, but two of our favorite killer craft shows. That’s right, amigos, the Renegade Craft Fair is returning to duke it out with her older, more-established sister show, Unique L.A.…on the exact same dates no less! Crazy, huh? 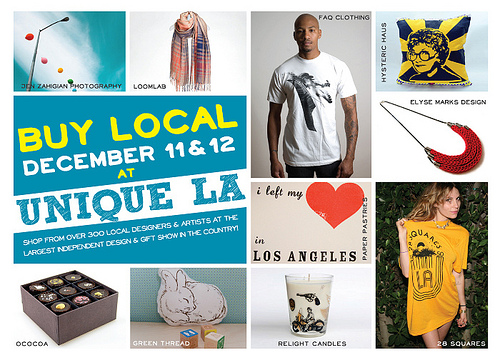 If we didn’t have such a busy weekend planned, we’d probably try and hit both shows, but the fact is, we do have a busy-ass weekend planned, so, it’s looking like the Renegade Craft Fair might win out this year.

Sorry, Unique L.A., we still love you and all, but the other show has a lot of the same kind of stuff, and best of all, admittance to the Renegade Craft Fair Holiday Sale is totally, 100% FREE. So, guess which price we like better?

Check out the flyers for more information on both shows. And whichever artsy L.A. gift show you chose this weekend…happy shopping!

Filed under Do, Make

Ah, man…just when we thought we couldn’t love Denny’s any more than we already do, they go and get all deliciously-seasonal on us!

That’s right, amigos, for a limited time only, the house of Denny’s is offering a Holiday Slam Menu featuring such mouth-wateringly-good concoctions as cranberry-orange pancakes, gingerbread french toast and peppermint chocolate cocoa and milkshakes! Mmhmm, top that, IHOP!

But as tasty as all that stuff is, the crowning glory of the new Holiday Slam Menu has gotta be the Holiday Turkey Melt: turkey, stuffing and Swiss cheese served on potato bread with a healthy dollop of cranberry honey mustard and a side of gravy for dipping. I think Christine said it all when she described this heavenly sandwich as: “The best part of Thanksgiving“.

Hmmm…for me, the best part of Thanksgiving has always been the loving communion with cherished friends and family, but, if Christine says it’s all about the food, well, who am I to argue?

Either way, this spectacular sandwich tastes like the best Thanksgiving leftover sandwich you ever had. Seriously, it’s kinda magical. But, it won’t be around for long, so, check it out while you can. Yum!