Sure the writing is kinda obvious and the only real “name” in the cast — wait, is Harry Hamlin still considered a “name”? —  was literally sliced in half on the pilot, but for some reason, Christine and I are already seriously hooked on the new TV show “Harper’s Island”.

If you’ve somehow managed to escape the ubiquitous commercials and billboards, “Harper’s Island” is a limited-run murder mystery series (meaning it will resolve itself completely, telenovela-style after 13 episodes) airing Thursdays at 10PM on CBS. Yes, that CBS… 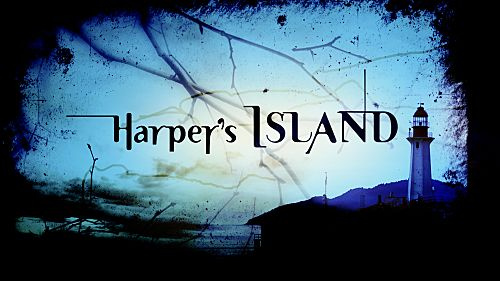 Set on a spooky, fog-shrouded island just north of Seattle, “Harper’s” isn’t exactly award-worthy fare, but, so far there has been plenty of gratuitous sex and some shockingly-gory murders — one dude was beheaded by the engine blades on a boat! Awesome! — so, like I said above, we’re kinda hooked.

The other big selling point for us is that the show will end in 13 weeks. I mean, hell, we’ve watched way lesser shows for a lot longer — yeah, you heard me final two seasons of “Angel” — so, 13 weeks of Lifetime TV-movie actors getting the axe (literally!) sounds cool to us.

So far, the premise is pretty much a “Scream” rehash with the troubled daughter of a murdered mother returning home to the Island for a friend’s wedding. Haunted by her mother’s death, the girl is kind of a cutesy basket case and the fact that every other character acts all “murderous” all the time doesn’t help put her frail mind to ease.

So far, people have violently chopped the heads off fishes, burned snails with a magnifying glass and revealed Satanic-looking tattoos just before getting in a crazy bar fight. Can you say, suspects? Wow!

Seriously, this show is like a crash course in cheesy soap opera acting: say or do something creepy, smile darkly to yourself…and hold that pose while the music builds. It’s kind of hilarious. And with almost every character already having had one of those moments, guessing who the killer is, and why they are killing everyone could be kinda fun.

Or not…but hey, it’s only for 13 episodes, right? So, if you’re looking for some cheesy so-bad-it’s-good fun, check out “Harper’s Island”. And, seriously, take a drink every time someone does something creepy and, trust me, you’ll be wasted by the fifteen minute mark. A-W-E-S-O-M-E!

The cheesy, Brian-Adams-heavy song selections aside, this week’s “American Idol” kinda rocked…and with the exception of Kris Allen, Adam Lambert and Lil Rounds, it had nothing to do with the show, and everything to do with our favorite guest judge in recent memory…Quentin Tarantino!

Yep, the badass filmmaker was back for another visit to “Idol”, and even though he didn’t get much screen time — neither did the judges in that horribly misguided effort to streamline the show, yikes! — QT did seem to have a blast “tutoring” the contestants. So, yay for that.

And though the show was just as gloriously over-the-top as any true Tarantino fan could have hoped for, our biggest gripe with this week’s “Idol” is that they didn’t show a trailer for QT’s upcoming flick, “Inglorious Basterds”. Huh?

I mean, hello, why else was he there if not to promote his new movie? I don’t know if it’s because the movie is rated R and might offend the delicate sensibilities of the “Idol” audience or whatever, but I know we wanted to see a new frigging trailer! Man alive, you missed the boat again FOX…

So, until a longer trailer pops up online, you can check out the rocking teaser spot for “Basterds” here. Enjoy!