OK, this story could be as phony as that fake-ass Bigfoot “corpse” they discovered in Georgia recently, but if the Yeti footprints pictured below are for real, then, wow…this Yeti, for one, will be very pleased indeed! 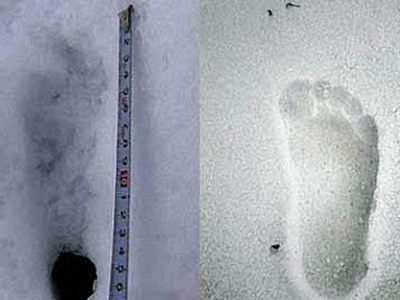 Discovered by the rocking Japanese team from the Yeti Project Japan during a grueling 42-day expedition to the  Himalayan peak of Dhaulagiri IV, the footprints — shown larger in the first pic above and on the left, in comparison to a human footprint, in the other shot — are said to be irrefutable proof of the mythical Yeti’s existence. Awesome!!

So while Yeti Project Japan leader, Yoshiteru Takahashi, prepares to head back up the mountain for more scientific proof, and maybe even some video this time, the Bigfoot and Yeti geeks of the world — myself wholeheartedly included! — will be waiting breathlessly to see if this Yeti footprint is the one that sticks, and finally silences all those non-believing haters out there.