This past Thursday, September 18th, would have been Greta Garbo’s 103rd birthday. And seeing as my brother Ryan and I are both huge, lifelong fans of “the Swedish Sphinx”, I thought it only appropriate to celebrate this monumental occasion by posting this super-cool, super-rare color photo of the woman of the hour herself.

Taken during GG’s last photo shoot at MGM — during production of her final film, the virtually unwatchable “Two-Faced Woman” (1941) — the photo is one of only a handful of color photos ever taken of “the face of the century” and as such, is considered very rare. 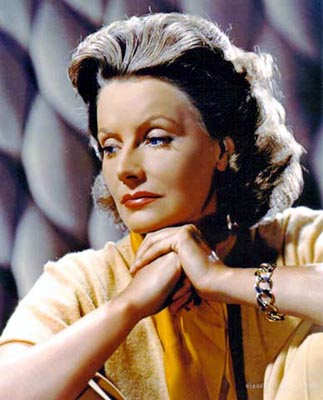 The picture was taken by legendary Hollywood photographer Clarence Sinclair Bull, whose iconic work includes not just some of the most famous pics of Garbo, but also scads of other classic shots of Hollywood greats from the golden age.

As luck would have it, Ryan, Laura, my stepmom, Wendy, Christine and I had a chance to see this print in person at the incredible “Made in Hollywood: Photographs from the John Kobal Collection” exhibit at the Santa Barbara Museum of Art a few weeks back.

If you get a chance I encourage anyone within driving distance to head up (or down!) to Santa Barbara to catch this amazing show before it closes on October 5th. For although the gallery space dedicated to the show is very small, the photos there are almost breathtakingly beautiful.

Seriously, you could lose yourself for hours in some of those inky, velvety blacks in the B&W prints. Just really top notch stuff all around…and if you go on Sundays, admission to the entire Museum is free! Yay!

So, check it out while you can. And in the meantime, Happy Birthday, Greta!