After all the drama associated with scoring the tickets back in April, Christine and I finally saw Radiohead in concert at the Hollywood Bowl this week. Hooray!

The band was in town for a two night stay at the Bowl and we saw the Monday night show (8/25), which according to the vastly different set lists I saw for both nights, seems to have been the better of the two shows.

For not only did the band play almost all the songs from their haunting new album “In Rainbows”, but they also did a beautiful, stripped-down cover of the Neil Young classic “Tell Me Why” from his “After The Gold Rush” album. Thom Yorke’s voice on that song was straight up beautiful. Really amazing!

And better yet, the band also dug deep into their vast library of tunes to play some of our favorite songs from “Kid A”, “Amnesiac”, “Hail To The Thief”, “The Bends” and even, to the delight of the crowd, one of their best-loved albums, the band’s seminal “OK Computer”.

Man alive, when those opening chords of “Karma Police” filtered through the Bowl during their final encore, you could probably hear the audience screaming from space. That place went insane!

Also surprising was a stirring rendition of the song “Cymbal Rush” from Thom Yorke’s underrated solo venture “The Eraser”. I thought it was cool that the rest of the band let him play one of his own songs during the first encore, and the fact that he flubbed up on the piano and actually had to start again was very funny and totally endearing. Yorke actually told the crowd to “Shhh” so he could remember how the song went…hilarious! 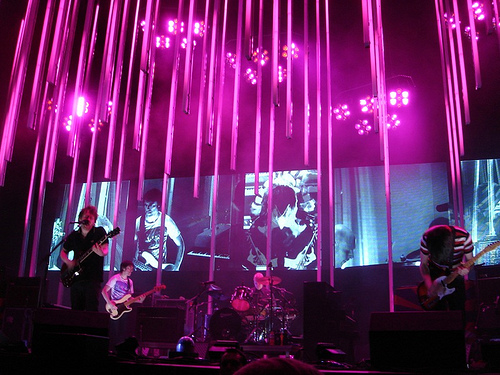 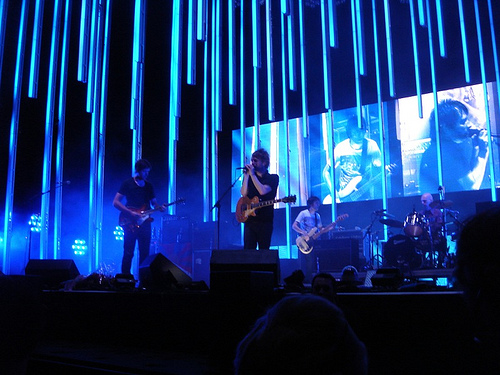 And though the music was absolutely transcendent, the things the band did with lights and video screens was out-of-this-world amazing. I seriously doubt Christine and I will ever see a show that beautiful, I mean, those lights onstage were just gorgeous.

I’m not sure how they worked the light magic, but the stage was draped with these kind of chandelier-like tubes (they might have been glass) that lit up, changed color and even simulated rain.

As you can see from the pictures — which appear here “on loan” from fellow Radiohead fan Amy who took them at the band’s Tampa show in May, thank, Amy! — the set was almost too beautiful to look at. Truly dazzling…

And cooler still was the way the band used the Bowl’s groovy new video screens. Rather than simply filming the performance, they actually split the screens into quarters with each section highlighting a different band member playing live.

Even more amazing was the fact that there were virtually no cameras visible onstage. So, I don’t know what kind of crazy hidden camera tricks they were working, but that shit was super cool. And just when you’d get used to the arrangement of the screens on the monitors, they would change up and rotate, collide, even overlap. I joked with Christine that it was enough to give you a seizure…but wow, what a way to go!

And though some of the jackholes seated near us were a little loud and totally annoying — one poserish ho bag spoke in a fake English accent all night…grrr! — the sweet scent of some fairly primo weed wafting through the multicolor air all around us more than made up for them.

All in all, a pretty amazing night under the stars with Radiohead…wow…

2 responses to “Radiohead @ The Hollywood Bowl”