Christine and I returned from our trip to Tampa and St. Petersburg almost two whole months ago, so this post is a little late in coming, but trust me, Kojak’s House of Ribs is worth the wait!

Nestled under a thicket of giant live oak trees dripping with Spanish moss, Kojak’s is housed in a converted Southern bungalow-style home just a few blocks from the beach in South Tampa. And while I had read a review of the restaurant in one of my guide books before flying out to Florida, I actually stumbled upon Kojak’s House of Ribs quite accidentally. 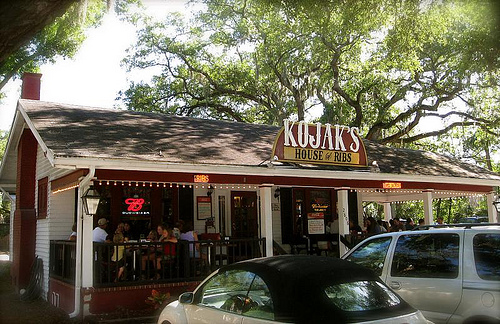 Christine was busy at her MSA Conference that day and my Mom and Courtney weren’t due to arrive till later that night, so, with ribs on my mind, I set off in my rental car to find some sweet Southern BBQ. And since the picking were decidedly slim near our hotel downtown, I ended up crossing the bridge into South Tampa.

After cruising down the shoreline dotted with beautiful older homes and groovy 70’s-era condo towers, I took a random right turn at the end of the road and ended up literally smack dab in front of Kojak’s. Yeah, for once my mapless wandering pays off!

It was kind of late in the afternoon when I pulled up and there were only three other diners there — which usually worries me a bit — but the place was so damn cute (there are ceiling fans on the veranda!) I knew the minute I saw it that I was gonna eat me some Kojak’s.

In case you were wondering — I know I was! — the name Kojak’s comes from co-founder Bill J.W. Forney’s nickname. Forney was the Chief of Detectives in Midwest City, Oklahoma for years and even when he left the force to open his first BBQ joint in the early 1970’s, the “Kojak” moniker stuck. So when Bill’s brother Bud Forney decided to open his own BBQ shingle in Tampa a few years later, he took the family BBQ sauce recipe and the name Kojak’s with him. And thirty years later, this South Tampa institution is still going strong!

Parking out front, I headed inside and ordered the rib dinner pictured above. This mouth-wateringly good combo platter consists of a generous portion of Kojak’s spare ribs and two sides. I got the parsley potatoes and the baked beans, and though the beans were just alright, those potatoes were so buttery and delicious I kinda wanted to marry them. Amazing!

And the ribs…holy smoke, were they good! Dipped in the spicier of the two Kojak’s BBQ sauce choices on the table, that meat was fall-off-the-bone spectacular! Just incredible…

But the highlight of the meal was the Key Lime pie. I don’t know if it’s the proximity to the Florida Keys, the fact that they make the pie fresh daily in the Kojak’s kitchen, or those sweet almonds baked into the crust, but that was one of the best pieces of pie I have ever had anywhere! I’m not kidding, man, that almond crust alone will haunt your dreams!

In fact, the pie was so good, I knew I had to share it with Christine, so I ordered a second piece to go. And even though she ended up eating it with a spoon from a Jerk Chicken Shack downtown — in my pie haze, I forget to ask my waiter at Kojak’s for a fork! — Christine too kind of wanted to marry that Key Lime pie!

And according to the Kojak’s website, the pie isn’t even their most popular desert! Something called “Mama’s World Famous Chocolate Cake” holds that title. So, if nothing else, it gives me one more reason to head back to Tampa in a few years and try it out…yum!

One response to “Kojak’s House of Ribs, Tampa”