Christine has always favored Ben & Jerry’s over all other ice creams, and even though I must admit to being much more of a Baskin Robbins man myself, I do love me some sweet, socially-conscious Ben & Jerry’s sometimes too.

Their Chunky Monkey kind of slays me…it’s amazing. And Christine actually fought a woman to the death for the last pint of Cherry Garcia at Vons one time. Yeah, um…we don’t talk about that much…

The thing I dig most about Ben & Jerry’s is that they make great gourmet ice cream for a cause, several of them in fact, and yet despite the often serious nature of the causes they morph into flavors, the company maintains a cool, cheeky sense of humor. Who else but those crazy hippies from Vermont could take a cause as noble as ONE.org’s campaign to “make poverty history” and make it into ONE Cheesecake Brownie?

Haven’t tried that one yet, but man, that is just hilarious. So when we heard that Ben & Jerry’s were creating a new flavor to honor John Lennon’s lifelong commitment to the peace movement, we were all over that shit!

Launched in Times Square on May 27th, Imagine Whirled Peace is caramel and sweet cream ice cream swirled with fudge peace signs and toffee cookie pieces. And, man alive, is it delicious! 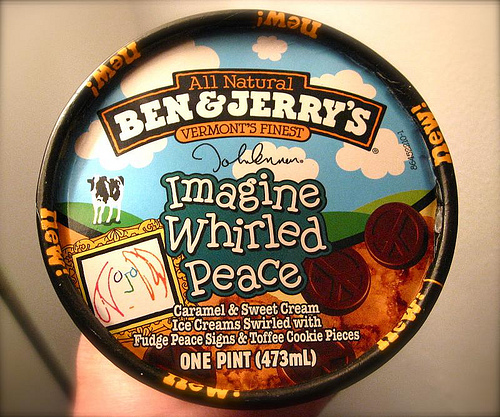 Even cooler than the ice cream is the way it was introduced to the world. Staging a recreation of Lennon and Yoko Ono’s famous “bed-ins for Peace” with super cool actress Maggie Gyllenhaal, B&J’s co-founder Jerry Greenfield and Jeremy Gilley, founder of Peace One Day, Imagine Whirled Peace was literally launched from bed. How cool is that?

As always, a portion of the profits go towards the Peace One Day foundation, which was started by Gilley to keep the peace movement alive in today’s crazy world. Peace One Day events are celebrated annually on September 21st.

And while she wasn’t there in person to launch the flavor, Lennon’s widow, Yoko Ono did provide a statement for the event that supposedly brought down the house…er, bedroom. “Make peace — a dream you dream alone is only a dream. A dream you dream together is reality.” Wow, almost me wanna run out and buy more some ice cream…nicely put Yoko!

And while I gotta admit that I was not initially turned on by the actual ingredients in the flavor, one bite of that toffee cookie dough goodness changed my mind immediately. Imagine Whirled Peace is straight-up fantastic! And though I usually find large chunks of chocolate in ice cream to be too hard, those tasty little peace signs literally melt in your mouth. Must be the fudge factor.

So even if you don’t eat it in bed, I urge you to check out the links above, help make a difference and most of all, as Lennon famously encouraged us to do with peace, give this flavor a change, baby. You’ll love it!