Even though his last movie, “Cassandra’s Dream” totally sucked — this despite featuring a uniformly excellent cast, including Ewan “Obi Wan” McGregor, Colin Farrell and the scorchingly-hot newcomer, Hayley Atwell — I am still a die hard Woody Allen fan.

And the fact that every other movie he makes is horrible will not stop me from seeing just about everything he makes. The way I see it, Allen makes enough movies that he can make a real clunker every other time out. As long as someone keeps giving him money to write and direct and super cool actors keep on signing up to work for him for scale…I say rock on, Woody!

And though my favorite films of his are mostly from the 1980’s — “Hannah and her Sisters”, “Broadway Danny Rose” and “A Midsummer Night’s Sex Comedy” — there are at least three other movies of his from every recent decade that I love in a big way. And I’m just talking about his major works like “Bullets Over Broadway” and ” “Deconstructing Harry”, but I also love me some minor Woody Allen as well…”Manhattan Murder Mystery” anyone? Classic!

Non-fans may see Allen’s recent “Anglophile period” as just another tired (if accented) rehash of his usual shtick — and though “Match Point” ranks with his finest work ever, I’d have to agree with them on “Scoop” and the aforementioned “Cassandra’s Dream” — but despite the misfires, I actually found it kind of exciting that he was trying something new for a change.

So, you can imagine how excited I was to read that Allen’s next cinematic venture, “Vicky Cristina Barcelona”, was shot entirely in Spain, featuring mostly Spanish actors. Even cooler than that is the fact that the movie received a ten-minute standing ovation after it’s premiere this weekend at Cannes! Ten minutes…man, those Frenchies rule!

Let me see…all-star cast, shot in Spain and it’s a comedy…gloria a Dios. Welcome back, funny Woody! 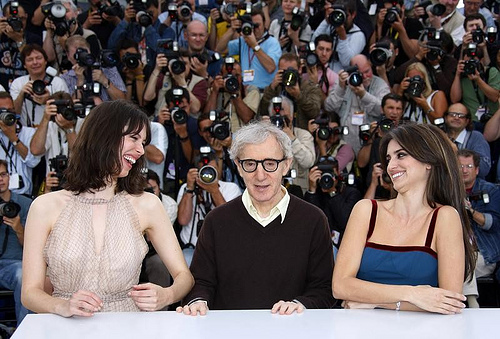 And while “Vicky Cristina Barcelona” — which comes out on our shores on August 29th — is not eligible for any major awards action at Cannes (having screened out of competition) I’m still counting the days till I can give the movie a ten-minute standing ovation of my very own right here in Burbank.