I should start by telling you that ever since Tom and I saw the movie “Waitress”, we have been obsessing over fresh-baked pie. And though The House of Pies in Los Feliz comes pretty close, we have yet to find the perfect slice in Los Angeles — though Tom is inexplicably fond of the banana cream pie at the nasty Marie Calender’s by our house, which I will never understand.

So a few months back, I bought a pie cookbook from my store, “Killer Pies: Delicious Recipes from North America’s Favorite Restaurants” by Stephanie Anderson. And although I have looked through it many times, I was still a little hesitant to take the pie-making plunge.

I love to bake, but pie crust seemed very daunting for some reason. So when Tom requested a pie for his birthday instead of a cake, I decided to give it a go. He picked out his favorite pies and gave me the top three: Banana Cream (stop with that already!), Lemon Merinque and Wild Blueberry Pie.

Fortunately, I was able to talk him into a “seasonal” fruit pie, so he settled on the delicious sounding Wild Blueberry Pie recipe from a restaurant called Westville in Manhattan’s West Village.

Even before I bought the ingredients, I was worried about the crust (this was my first solo pie venture, remember) and called my mom to get her expert opinion. She was very helpful and patient (thanks, mom!) especially when I was trying to describe the consistency of the crust over the phone!

And although I was sweating it the whole time, Tom and the rest of our guests thought the pie came out great. The crust was flakey and the filling, which consisted of half fresh berries, half frozen and some lemon juice and zest, had a wonderful tartness that kept it from being too sweet. Overall I’d say it was a pretty decent first pie. So, happy Birthday, Tom!

Next on my pie making list…the Strawberry Rhubarb Pie from The Ham Shoppe in Valle Crucis, North Carolina. This one’s all for me though…no occasion necessary!

Wii will rock you!

We have been desperately craving a Nintendo Wii gaming system since our nephews brought theirs down from Oregon over Christmas. And as luck would have it, we found one a couple of weeks back at the dirty old Target in NoHo! Actually, that Target isn’t really that dirty anymore, but we still call it that, because, compared to the shiny new Target uptown, it’s a bit…rustic.

Anyway, cleanliness aside, dirty Target is where we found our beloved Wii. And while we had to line up with the other Wii nerds at 7:30AM (on a Sunday!) it was totally worth it as we finally scored a system of our very own. 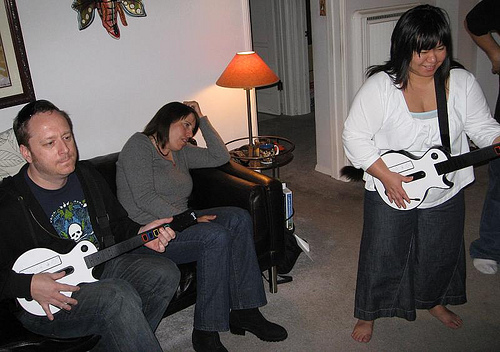 But better still was the first game we bought…the epically cool, “Guitar Hero III”. I’m not sure who was happier about this purchase, us, or my brother Ryan and sister-in-law Laura, who have been at our place literally EVERY weekend since we bought the game. They actually came over and played one night while Christine and I were at a party…can you say, addicted?? Wow…

But once you’ve played this crazy-amazing game, you’ll be hooked too. It’s kind of insanely cool and even though I totally suck at it, the graphics and songs are so awesome that watching other people play the game is almost as fun as playing it yourself. Hands down, one of the best video games ever!

And then, just when I though “Guitar Hero” couldn’t get any cooler, I received a second Gibson guitar Wii controller for my birthday from Ryan, Laura, and our bad-ass friends James and Tim. Yep, we got two guitars now, baby! And just like that, the game doubled its fun factor.

Seriously, now two players can jam at the same time, one on bass and one on guitar, and since the bass playing seems mildly easier…I can almost keep up with the other guitar Gods in the living room! Hooray! 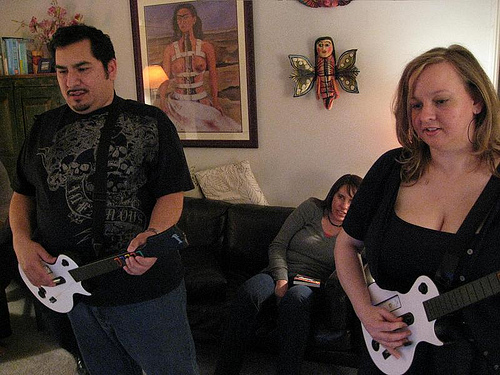 So, after celebrating a combo birthday party on Sunday night for James (whose birthday was on March 4th) and me (whose birthday is, no fooling…today) we rocked out with our first official Wii party! Unfortunately, space being what it is in our place (players needs room to jam, yo!) we limited the party to James, Tim, Ryan, Laura and our friend Amy. And even that was pushing it as Christine apparently needs a zone of silence around her when she plays.

But that’s cool, I mean, everybody’s got their own style…Laura rocks the whammy bar like nobody’s business, James has some serious tongue action going when he plays and Tim is probably the boldest of all…going all singer-songwriter by actually sitting while he plays! Amazing!

Anyway, as you can see from the pics, we had a blast. And lest anyone out there feel left out, fear not, for I predict many more “Guitar Hero III” Wii parties in our future…so, get ready to rock!