Wow…talk about Super Tuesay. In my entire life as voter I have never had a harder choice to make. Both Clinton and Obama would make bad-ass presidents, and I was literally on the verge of flipping a coin at one point.

In fact, when a Clinton pollster called our house as we were preparing to leave to vote, Christine answered her quite honestly by saying that she was still undecided but would make up her mind when she got there. 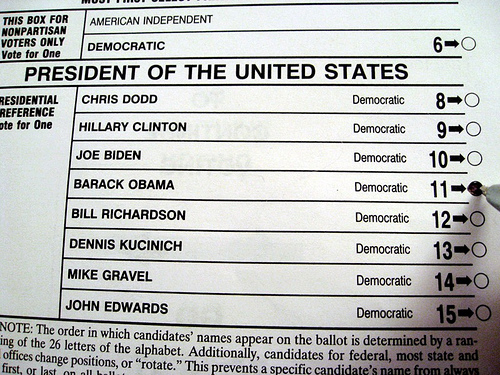 We were like a couple of undecided Kennedy cousins unsure of whether to listen to Caroline and Uncle Teddy or Kathleen and Kerry. It was madness…

As you can see from the picture, we did eventually decide on who to vote for, and though our man didn’t win in California we can hardly complain, since, as I said above, we really like them both. I say join forces now and rule the galaxy! I seriously don’t care if it’s Clinton/Obama or Obama/Clinton, as long as you keep my true favorite little Johnny Edwards in there somewhere as Attorney General.

But whatever the final outcome in this truly unprecedented election year, I think the most exciting news yesterday was the whopping Latino voter turnout. I read somewhere that a record-breaking 29% of Latinos voted in California yesterday. That is so awesome! I don’t care who they voted for, just the fact that they came out at all is pretty damn incredible.

So rock on, hermanos and as I said above…que viva los voters!