I shouldn’t be surprised by the e-mail, as SAG has been a huge supporter of the WGA since even before the strike began, but the fact that their membership continues to stand beside us during this difficult time is really impressive.

I’ve met slews of SAG actors on the picket line in the past few weeks, some famous, some less so, but all of them have been ready and willing to stand with us in our fight for a fair deal from the AMPTP.

So, in honor of our super cool allies in the Screen Actors Guild, I’ve decided to post some of my favorite pics of my new BFF’s — seriously, that one-legged dude who won the first season of “Big Brother” (Eddie, McGee, pictured below) and I are like peas and carrots these days! — accompanied by the full text of the rousing e-mail of support sent out by President Rosenberg tonight. Enjoy!

I am writing to you on behalf of 120,000 proud members of Screen Actors Guild who stand with you in solidarity as your strike continues. We believe that now more than ever, we must remain strong and even more committed to achieving our common objectives. We are proud to walk shoulder-to-shoulder with you and SAG will be there for as long as it takes.

Your fight is our fight. Our National Executive Director Doug Allen and I are working around the clock with Patric Verrone and David Young to coordinate our strike support efforts. I’m sure you have seen some of the thousands of Screen Actors Guild members who’ve been walking the picket lines in Los Angeles, New York and around the country for the last six weeks.

I and other Screen Actors Guild representatives have attended your negotiations and your negotiators have been reasonable and professional. The AMPTP put draconian rollbacks on the table, wasting months of negotiating opportunity. The AMPTP walked out of negotiations twice…most recently after an unreasonable ultimatum that WGA withdraw six key bargaining proposals including several relating to new media compensation.

It is time for the AMPTP to return to the bargaining table.

I salute the cast members and rank-and-file SAG members who are so much a part of this struggle and have made their opinions known to the press, the public, and our employers. As most television shows and motion pictures have shut down, actors are not working. But we know that this fight is for the rights of all creative artists, and our collective future is at stake.

We share your sound and reasonable goals for fair compensation for new media formats and we believe you are doing the right thing by taking a stand. 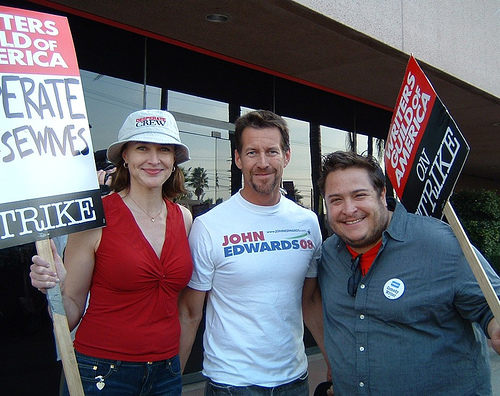 As 2007 comes to an end please be assured, Screen Actors Guild will stand with you for as long as it takes. I wish you and your families peace, perseverance and patience during this difficult time.