We Write, They Wrong…

As you probably know by now, the AMPTP once again broke off talks with the WGA on Friday after issuing us a rather puzzling ultimatum. Remove every meaningful issue to writers from the table (the bulk of our internet proposals, coverage for reality and animation writers, etc.) and then, and only then, would the AMPTP consider resuming talks. 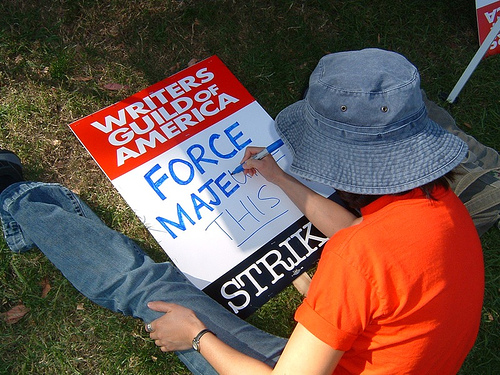 Um, last time I checked, negotiating was a two way street. You give us an offer, we give you one back and it goes on from there.

Telling us to totally gut everything that matters to us most from our discussions before we can even resume discussions seems a bit contrary to the process. Doing that would be like negotiating with ourselves, and once we negotiated ourselves low enough, and revealed our bottom, bottom line to the AMPTP, they’d offer us half of that and call it a day.

I’m not making this up, this is how they have always done business and honestly, it’s like, union busting 101.

We’ve seen this crap from major corporations before and if it didn’t work with other unions in this country, what makes you think a union of motion picture and television writers — who are more galvanized than ever behind the kick-ass leadership of WGA President Patric Verrone (pictured above with Wan and myself) and Vice-President, David Weiss (below) — would fall for what is essentially a weak storyline?

No one is buying your bit about not making money off the internet, guys. You can paint it any way you like, but it just doesn’t hold water, and like those sprawling Manhattan apartments on sitcoms, your arguments here are fictional in the extreme. The internet is a gold mine, and you know it. If you didn’t, then why on earth would you be fighting so hard to deny us any part of it?

So please, AMPTP, save the drama for the dramas and come back to the table with a real offer this time. It’s not just fair, it’s the right thing to do…

One response to “We Write, They Wrong…”