Earlier tonight, Jack Black and Kyle Gass of the kick-ass, two-man band, Tenacious D agreed to play a mini-set on the picket lines outside the Fremantle North America headquarters at 4400 West Alameda in Burbank. Rock on! 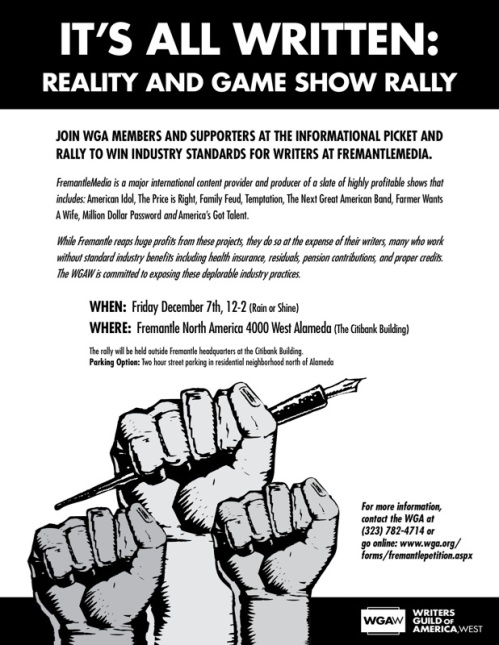 Producers of such hit shows as “American Idol”, “America’s Got Talent”, and “The Next Great American Band”, Fremantle is one of the most successful producers of reality and game show programming in the world.

Yet despite their phenomenal success, Fremantle has steadfastly refused to unionize their writers — yep, believe it or not, reality shows are written! — many of whom work without standard industry-wide benefits like health insurance, residuals, pension contributions and proper credits.

Designed to raise awareness of the plight of these often-overlooked members of our guild, our goal is to force to Fremantle to at least consider going guild. It’s a tall order, but hey, aren’t they all?

So, rain or shine — and right now, it’s looking like the former — the event kicks off with a rally at noon followed by speeches by WGA president Patric Verrone, my rocking Strike Captain Aaron — a former writer for Fremantle’s “Temptation” — and a number of other former reality and game show writers. Then, at one o’clock, Tenacious D will take the stage to rock the picket line.

This promises to be a pretty rousing event, so if you happen to be in Burbank/Toluca Lake on Friday afternoon, swing on by and D will rock you!

For more information on the event or to check out the WGA’s Fremantle petition online, please visit: www.wga.org