I guess I should remove the word “considering” from my last post, as Mr. Last Call himself, Carson Daly crossed the picket lines at NBC today to tape his cheesy late-night show. I know to be true, because today I had the privilege of being one of the many WGA strikers put on Carson Daly Watch for the day.

We knew he was due to arrive sometime just before 3:00pm and manned our many NBC gates accordingly. Every major entrance to the studio was lined with people raring to go with their Carson Daly-specific picket signs. Hell, we even knew the make and model of his car — a black Cadillac Escalade with a bike rack — so if he came by, we’d spot him for sure.

And spot him we did! Like clockwork, the Scabmaster rounded the corner towards the usually slow Gate #7 on California St. with his shiny bike rack in tow. 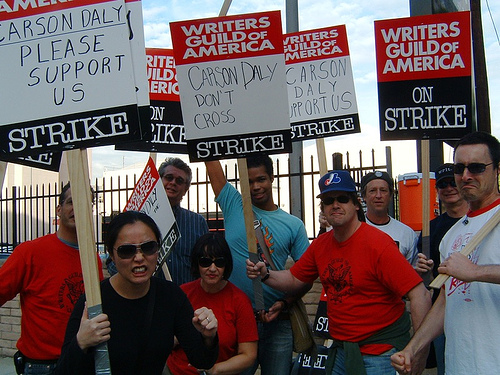 But rather than stop, the brave Mr. Daly sped up. Our chants and taunts ringing out in his ears — his windows were down, so I know he heard us — Carson tore off down the street towards another gate.

Grabbing his cell, our Gate Captain, a feature writer named Irving (pictured in the far left in the shot below) called the other gates to alert them. And quicker than you can say, checkmate, Carson Daly was blocked from entering every single gate at NBC Burbank. Yeah!

Of course, he could have driven past us if he wanted too, but I honestly think he was too scared to even try. So instead of manning up and charging past us — I mean, come on, the only thing worse than a scab is a wimpy scab! — Carson circled the NBC lot in his Escalade for a whopping 20 minutes, probably pissing himself the whole time. Ha!

And then, after finally running out of options, Carson contacted someone on the inside and they opened the rarely-used, chained-off Gate #3 on Alameda (pictured below in the pic with fellow picketers Nina and Wan) so bike rack boy could sneak onto the lot! 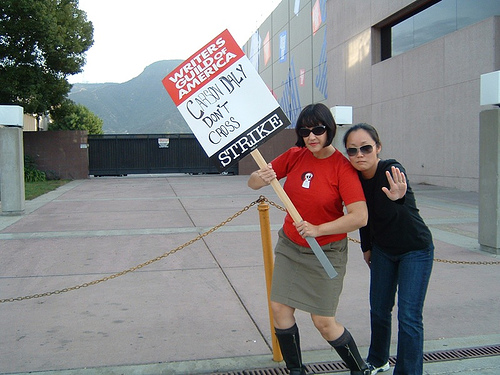 Wow…all that drama just to get to work. Hardly seems worth it, Carson. And with the crack team at the Carson Daly Taskforce on your ass every day from here on out, maybe you should reconsider coming back at all. Because now that we know you favor Gate #3, trust me, dude…we’ll be back!

Go, taskforce! If you’re interested in hearing another Taskforce members take on the day’s events, check out my bud Nina’s video blog at: YouTube

2 responses to “The Carson Daly Taskforce!”