Day four of the strike was pretty much business as usual: the AMPTP still refused to even talk to the WGA leadership, I continued walking the picket line at NBC studios, and that old scab, WGA member Ellen Degeneres, continued to cross a picket line — that included her own writing staff! — to tape her stupid show.

Yeah, you heard me. Ellen Degeneres, who just a couple weeks ago weeped like a lunatic for a puppy, could give a shit about her own writers. The thing that really steams me is that earlier in the week, all these news outlets reported how Ellen’s show didn’t tape on Monday in honor of the strike…well, technically, that’s true…the show did not tape on Monday.

But that’s only because Ellen doesn’t tape her show on Mondays anyway! Wow, guess it’s pretty easy to appear sympathetic to our cause, on your DAY OFF! On Tuesday afternoon (not her DAY OFF) “America’s Sweetheart” danced right across our picket lines to tape her show. In her awkward, sputtering opening monologue (which could have used a rewrite, had she the staff to pen it for her) Ellen said she didn’t wanna disappoint her fans by not doing her show.

How sweet, she did it for the fans. Well, lemme tell ya, that phony bitch doesn’t have many fans right now on the picket lines, and if she ever hosts the Oscars again, I think she’ll probably give that old Red-baiting name-namer Elia Kazan a run for his money in the popularity department.

To paraphrase some of the more color words used to describe Ms. Degeneres on the front lines, I’ll simply say: “You suck, Ellen!”

Someone who definitely doesn’t suck is Jay Leno, who paid his daily — and sometimes hourly! — visit to the picket lines to chat with his striking writers.

Jay arrived on his motorcycle (pictured above) just in time to hear a strike update/pep talk delivered to the troops by his head “Tonight Show” writer, Joe Medeiros (pictured below, with Jay). But despite Mr. Medeiros’ rousing speech — seriously, it was fantastic, this guy should run for national office! — I think the look on Jay’s face says it all. This strike sucks for everyone.

As usual, the brightest moments of the generally gray day, came in the form of food. Joe’s super cool wife (pictured below with her husband) has been in contact with several of the out-of-state vendors featured on “Tonight Show” remotes over the years, and the generous donations of fresh, air-mailed food have been pouring in ever since.

Today’s offerings included gigantic soft pretzels flown in from Philadelphia — “City of Brotherly Love” indeed! — by the fine folks at PhillyPretzels.com. Slathered in hot mustard, these pretzels were amazing! Thanks, Philly!

And for dessert? An industrial-sized thermos of piping-hot Ghiradelli hot chocolate, hand-delivered by a pink-tied agent from one of the biggest talent agencies in town, Creative Artists Agency (CAA)!

As you can imagine, the cocoa was delicious. And best off all, this pink-tied agent — his name was Ari and yes, he’s heard all the “Entourage” jokes! — didn’t take ten percent off the top, so this pot o’ chocolate love was all ours! Yeah! 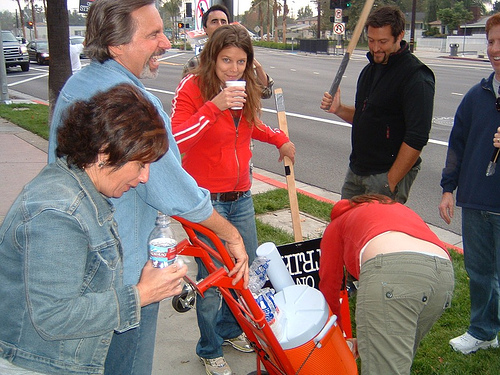