In non-strike related news, got a super cool e-mail (through my Flickr photo account) recently from Emma Williams, the Managing Editor of Schmap.com travel guides. Shockingly, Schmap!! selected one of the pictures I took on our recent trip to Nashville for inclusion on their site. Cool, huh?

The picture they chose is of the Grand Ole Opry’s Main Entrance, and while it is not my favorite picture from our trip, I was pretty stoked that Schmap!! liked it enough to include it on their website!

Having been to the new Opryland hall in person, I know that it’s not exactly pretty, so I imagine any picture that makes it looks halfway decent is a good one. Honestly, I didn’t even like the picture enough to post it on the blog, but now that it’s become so well-known, well, here it is! 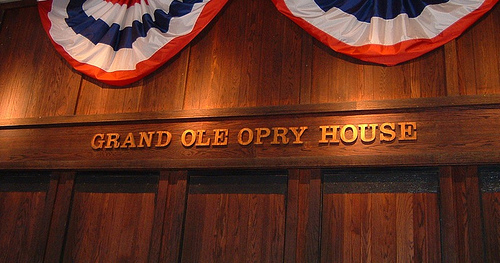 For those of you who’ve never heard of Schmap!! — don’t feel bad, I’d never heard of them either till they contacted me — the site is basically an amateur online travel guide, with maps, photos and reviews of where to stay, eat, shop, etc. in a number of travel destinations around the world.

Coolly enough, Christine’s store is included in the Los Angeles edition — no picture on that one yet, but I’ll work on getting a good one up on Flickr soon! But for now, whenever anyone explores the Schmap!! Nashville Travel Guide: Fourth Edition, my nerdy little cropped picture of the main entrance to the Grand Ole Opry will be there for all to see.

Despite the cold and the total darkness, here again the energy level of the WGA troops was higher than ever, and this time we were joined not just by members of SAG and AFTRA but also several members of the Directors Guild of America (DGA) and at least two very friendly dogs. All in all, a very cool bunch.

Our goal with the early arrival was to stop Teamsters (who have vowed not to cross our picket lines) from driving their equipment trucks onto the lot. Without the equipment, the shows would be forced to shut down and the disruption would hopefully force the AMPTP back to the bargaining table with us.

The results were mixed, but we did stop two Teamster drivers from crossing the lines. And when you consider the fact that all the major studios and networks sat these guys down last week and took the names of people who would not cross the picket lines, then threatened to fire them if they didn’t (which is TOTALLY illegal, by the way) the fact that ANY of these guys stood their guns and refused to cross our picket lines is pretty damn ballsy!

So, thanks, Teamster dudes, you guys seriously rock!

We didn’t stop them all from crossing — and I kind of understand why, I mean, it’s gotta be scary to possibly lose your job for someone else’s strike — but I do think our continued presence at the gates around town is starting to have a cumulative effect on their thinking. So, hopefully more Teamsters will join our cause in the days to come and we can force the AMPTP to resume contract talks.

Also got to meet some really cool feature film writers on this picket line. I shared an Egg McMuffin (taken from a huge donated box of them, pictured below!) with the guy who wrote the first “X-Men” and “Constantine” which was really cool.

And then later in the morning, joined the group in an impromptu sing-along of classic TV theme songs — “Alice” and “Diff’rent Strokes” seemed to be the crowd favorites — not exactly the kind of stuff you hear striking auto workers chanting, but hey, what do you expect from a bunch of writers?

Headed home at around 7:30 to drive Christine to the subway and seriously crash for a few hours before schlepping out to NBC in the afternoon.

A long day, but a good one. But man, just the sight of that box of steaming McMuffins emerging from the pre-dawn mist…mmm, talk about McDreamy…it was almost like I never woke up. =)