“The Office Is Closed”

Thought you might enjoy this super cool YouTube clip of some of the writers and cast from “The Office” working the picket lines. Really funny stuff, but my favorite quote of the day (not featured in this clip) is one that Steve Carell issued to the press on Tuesday.

When asked why he didn’t show up for work this week on “The Office”, Mr. Carell (a hero in WGA circles right now for his stance) cited a case of “enlarged balls”. Ha, awesome! If everyone in town had cojones like Steve Carell, this strike would be over tomorrow. Enjoy the clip and que viva la union!

Sorry for not writing more regularly, but have been walking the picket lines pretty much day and night the past three days and have been seriously fried by the time I get home. But tired as I am, my enthusiasm (not to mention that of my fellow WGA members) and dedication to this strike has only intensified the past past few days!

I’m not kidding, the energy of the writers on the picket line is truly amazing! 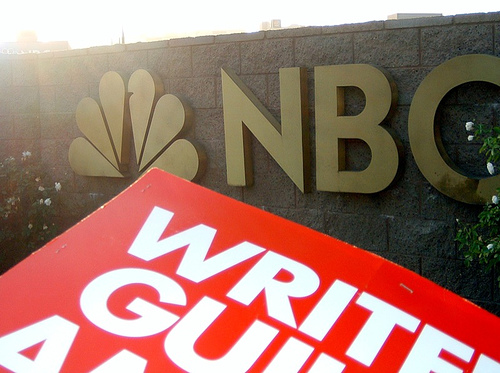 Spent Tuesday afternoon picketing outside one of the rear gates at NBC Studios here in Burbank, and though we didn’t get much traffic back there, I did meet some really awesome TV writers. Writers for HBO, NBC, FOX, basic cable networks like AMC, you name it, they were out there in force!

Many of the most passionate writers on the picket line were from “The Tonight Show” and since these guys are already feeling the economic pinch from not working, seeing them out there fighting for the cause was really inspirational. These guys kick ass! 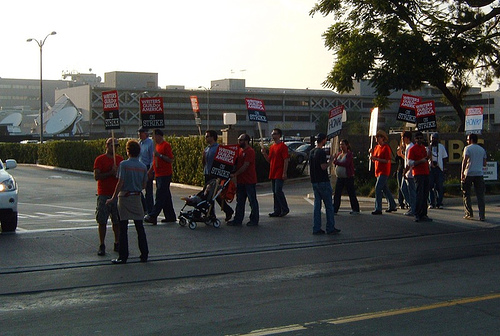 One of the coolest things that happened Tuesday was when a worker from inside NBC drove off the lot and then stopped about halfway down the block. Calling over one of the writers on the picket line (obviously a friend) the dude in the car handed his friend a crate of bottled water he’d taken from the NBC offices for us.

Ha! Suck it, NBC! We’re quenching our writerly thirst with your pilfered studio water (pictured below), hilarious! We should have staged our own Boston Tea Party and poured it out in the street in protest, but hey, we were thirsty. So, we totally drank it!

No major celebrity encounters on Tuesday, but we did get a shout out from “The Tonight Show” regular and former fatty, Ross “The Intern” as he drove past. Honking, he cheered us on and gave us an enthusiastic thumbs up. That was pretty cool and on a side note, it looks like he kept the weight off from “Celebrity Fit Club”. So, good for him!

Later in the day, myself and couple newfound friends (both of whom write for TV and one of whom is actually a former client of my ex-agent, Marci Wright! Ha! Small world.) moved to the “front lines” on Alameda.

Standing in the area just outside the main audience entrance to “The Tonight Show” the three of us were photographed from across the street by David McNew, a news photographer for Getty Images. You can see (and even buy, if you so desire) our lovely picture and many more at: gettyimages.com

It kind of sucks that there are no actual “Tonight Show” writers in the Getty pic, but hey, we’re all in this together, so, I guess you snap a pic of one WGA member with a picket sign, you capture them all. Ha!

Anyway, will post more on my “split-shift” picket line activities yesterday — at CBS Radford from 5-7:30am and then NBC from 3:30-5:00pm — later tonight, until then, enjoy the pics and que viva la union! 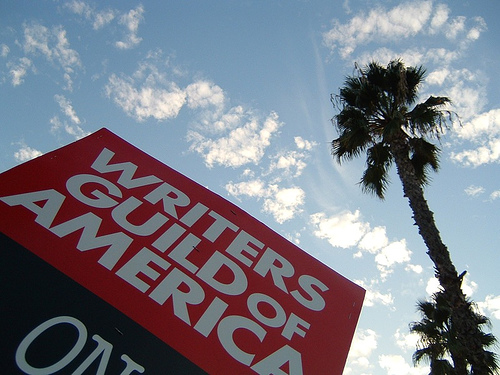 Monday was the first full day of the WGA strike and Hollywood writers were out in force, with more than 3000 members picketing outside 14 different locations in and around Los Angeles. And not only were the writers making waves, but many prominent actors and show runners (a fancy word for writer/producers) have also pledged their allegiance to our cause. 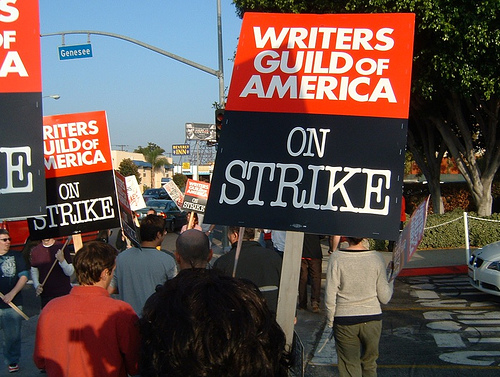 Emmy-winner Julia Louis-Dreyfus (wife of WGA member Brad Hall) walked off the set of her CBS show “The New Adventures Of Old Christine” to show her solidarity with the guild and Steve Carell and the entire cast and writing staff of “The Office” refused to work and hit the picket lines instead.

Jay Leno — who’s show, like many “live” late night chat-fests is in repeats until further notice — even brought Krispy Kreme donuts to the WGA hordes outside the NBC Studios! Right on, Jay! 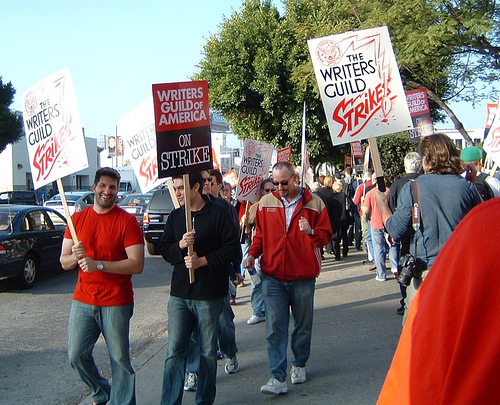 But the most promising news of the day is that 100-plus of the most powerful show runners in television (including Tina Fey of “30 Rock” and Shonda “Grey’s Anatomy” Rhimes) have vowed to stop working on their shows (despite the consequences of breaking their contracts) for the duration of the strike. Wow! Now, if that doesn’t get the AMPTP’s attention, I don’t know what will!

As I mentioned in my last post, I walked the picket lines outside the CBS Television City Studios in Hollywood from 1:00-5:00pm, and man, what a thrill! The energy level was through the roof and the supportive honks and cheers from passing cars, trucks and especially city bus drivers (go MTA!) was really amazing.

But one of the coolest (and most unexpected!) things I experienced on the front lines was the selfless participation of so many non-WGA members. I met at least two total strangers, neither of whom are in the union, who came out to support us just for the hell of it! Wow!

And we had a number of actors join us as well, with members of both SAG (The Screen Actors Guild) and AFTRA (The American Federation of Television and Radio Actors) walking the picket line right alongside us.

My favorites were “The X-Files” and “Terminator 2” star Robert Patrick (pictured from behind in the shot above) and former “SNL” regular Norm MacDonald, seen on the far left in the picture below.

Norm was very cool, giving interviews to the press and smiling for fan pictures, but Robert Patrick was downright awesome! Totally cool and super friendly, Señor Patrick said he hated the fact that the strike was happening at all, but since it was, he knew what side he needed to be on. So cool! 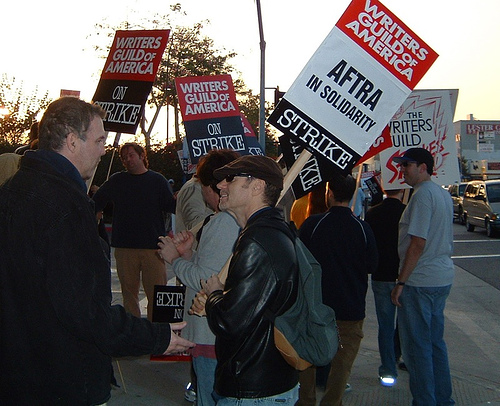 While the turnout at all the studios was spectacular (Fox Studios alone had 545 people marching outside their front gates!) the crowd at NBC Burbank was a bit light yesterday (roughly 121 people showed up), so tomorrow, I’m heading there to help boost their numbers and maybe even snag a free donut or two from Jay!