Though it doesn’t come out here until sometime late in December, in the interest of all things spooky and Halloween-ish, I wanted to share with you my thoughts on one of the scariest movies I’ve ever seen — and I’ve seen plenty o’ scary flicks in my day — the Spanish-language thriller, “El Orfanto” (The Orphanage).

Produced by “Pan’s Labyrinth” director, Guillermo Del Toro and masterfully directed by Spanish music video director Juan Antonio Bayona, the film is, hands down, one of the best movies we’ve seen this season. And not only is it a fantastic movie, but it is also absolutely horrifying.

OK, I know what you’re thinking: “Tom thinks everything is scary.” And, well…I do. But this movie really is terrifying! I actually screamed out loud (at a screening!) twice. Christine was mortified, but so scared herself that I don’t think she really noticed.

Though the visuals here are just as lush and creepy as anything you’d encounter in “Pan’s Labyrinth”, the real star of “The Orphanage” are the sound effects. Reminiscent of the truly spooky soundtrack in Robert Wise’s similarly-claustrophobic “The Haunting” (1963), the strange creaks and moans of the orphanage itself are positively spine-tingling.

Yes, I said spine-tingling with a straight face, and that’s because they are!

We were so unnerved by the soundtrack that we were both literally squirming in our seats. Seriously, I haven’t heard sound-editing like this since those kick-ass canon balls blasted through the hull of the ship in “Master and Commander”. And they won an Oscar for those!

Without giving too much away, “The Orphanage” is about a husband and wife (the super hot Belén “The Sea Inside” Rueda) who move with their young son into an abandoned orphanage in a remote seaside village in Spain. Abandoned orphanages? Remote seaside villages? Subtitles? Scary enough on their own, right? Well, just wait, because as you can imagine, it’s all downhill from there.

So, mark you calendars — “The Orphanage” opens in limited release on December 28th — brush up on your Spanish, and girder your loins, because this art house thriller will scare the living crap out of you!

Hey everybody, Farmer’s Daughter (aka Christine) here. Before I begin my first post, let me explain something about my new user name. Our friend Justin, who used to be impressed if I boiled water correctly, began calling me farmer’s daughter every time I did anything remotely domestic. And since Yeti9000 was taken, I guess the name kind of stuck.

Most of you know how much I love to bake, so when I heard they were having a Scary Dessert contest at the LAPL Halloween party on Saturday, my heart started to race. I was immediately full of ideas and couldn’t wait to start baking.

I decided on cupcakes (I know, shocking!) and looked to an old issue of Martha Stewart’s Kids magazine for inspiration. I decided to do mummies with a yellow cake and monsters with chocolate (both baked from scratch of course!), using a cream cheese frosting.

Although next time, I would probably use a butter cream frosting because it holds its shape way better than cream cheese. 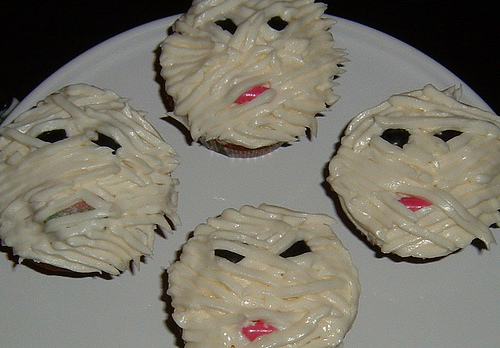 The mummies were VERY time consuming, so as you can see, I only made six of those, and the rest were monsters with green frosting.

Unfortunately, we were running late (no surprise there, except that it was my fault this time!). So by the time we got to the party, they had already judged the desserts. My friend Dora, one of the young adult librarians and the head judge, was nice enough to give me an honorable mention. Thanks, Dora!

But had we gotten there earlier, I’m sure my cupcakes definitely would have made at least 2nd place, probably 1st if they tasted them too! I’m sorry, but some of those deserts were seriously lacking, although the first and third place entries were pretty cool looking.

The 3-D first place cupcakes are shown above, but the real gross-out star of the contest was the kitty litter cake (served with a litter scoop from an actual litter box, below) which took third place.

Yuck, I don’t know how anyone could eat that!

My cupcakes proved pretty popular though and I was happy to notice that they were the only one’s completely gone at the end of the night. So, yeah!