After a long battle with lung cancer, pioneering country music legend and Nudie-suit-rocking bad ass, Porter Wagoner died Sunday in Nashville, TN at the age of 80. Recently celebrating his 50th year with the Grand Ole Opry, Wagoner kept a pretty full performing schedule right up till the end. 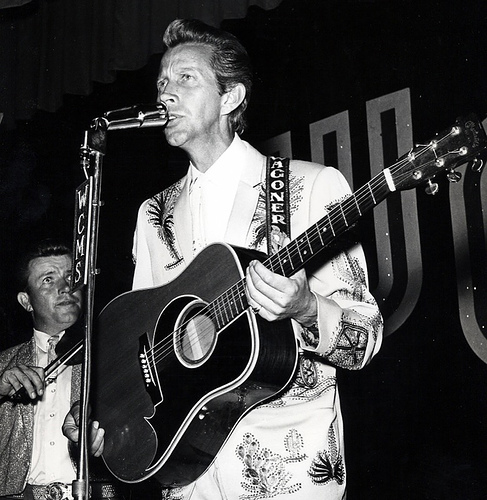 This past summer alone he performed dozens of times at the Opry — we’re still kicking ourselves for having missed him onstage with Loretta Lynn the day before we arrived in Nashville, urgh! — played to a sold-out crowd at Silverlake’s swinging Safari Sam’s (where we managed to miss him AGAIN!) and even opened for his longtime fans, the White Stripes, at Madison Sqaure Garden! Wow! Not bad for a sick old dude.

But Wagoner’s flashy tenacity is what made him who he was. Never one to stay down for long, he recovered from some pretty dark times — the devastating artistic split with his protege, Dolly Parton, the loss of his show, bankruptcy, and near total Nashville obscurity in the late-1980’s — with a gritty, old-school country style that was all his own.

Like Johnny Cash before him, Porter Wagoner didn’t bitch and moan when things got rough, he simply wrote a cool, bleak-ass song about it. Yee-haw!

We discovered Wagoner’s music when we got really into Dolly (her classic “I Will Always Love You” was written for him after their bitter split in the 1970’s) and have remained fans ever since. 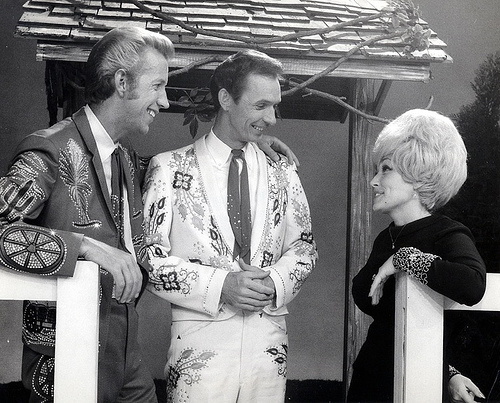 Speaking of Dolly, she and Porter reconciled their differences — she felt he used her songwriting talents to further his own career and kept her from pursuing one of her own while on his show, which, he probably did — years ago, and have remained good friends. According to several sources, she visited him just a few days ago in the hospital to say goodbye. Very sweet.

I could go on and on, but probably the best way to truly appreciate the genius of Porter Wagoner is to listen to his music for yourself. His final CD, this year’s Marty-Stuart-produced masterpiece, “Wagonmaster” is fantastic and a fitting final tribute to Wagoner’s true grit brand of country.

And though all of his many duets with Dolly are amazing, our favorite is the twangy, banjo-strumming classic, “Please, don’t stop loving me”. Trust me, even non-country fans will dig this song!

Say howdy to the rest of the folks up in “Hillbilly Heaven” for us, Porter. We’ll miss ya.