On Tuesday night Christine and I attended a WGA screening of Wes Anderson’s latest movie, “The Darjeeling Limited” (opening today in limited release) at the cool, ultra-cushy Arclight Theatre in Hollywood.

Anderson and one of his co-writer’s, Roman Coppola spoke afterwards as well, so it was crazy crowded and we arrived so late (I know, shocking) that I actually ended up sitting on the floor a few rows behind Christine. And let me tell ya, even the floor at the Arclight is cushy.

But the luxurious Arclight carpeting was nothing compared to the movie! 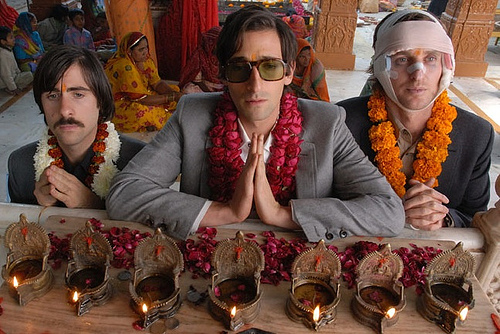 Without giving away too much of the plot, the story revolves around three brothers — superbly played by Jason Schwartzman, Owen Wilson and freakishly-tall-Oscar-winner, Adrian Brody (shown above) — setting off on a mystical and often hilarious train ride through India.

And while the movie is chock full of Anderson’s typically cool, idiosyncratic details — the train itself is so artfully designed, it’s almost like another character — the biggest surprise was how deep, heartfelt and truly emotional the movie is. Hands down Anderson’s best movie since “Rushmore” (my favorite of his films) “Darjeeling” has an earthiness and authenticity to it that sets it apart from anything else he’s made.

This might be the influence of Anderson’s new co-writers, or it could stem from the fact that they wrote most of the script while traveling together — like their characters — on a train in India, but no matter what the reason for this newfound depth is, the results are amazing.

The problem we usually have with Anderson is that sometimes his movies are too droll and detached for their own good, which totally kills any sense of humanity or emotion, and what you end up with are these stunningly beautiful — but ultimately cold — little shadow box movies. This trend started with “The Royal Tennebaums” (which I still love, despite its generally frosty tone) and reached its disastrous zenith with Anderson’s last movie, the virtually unwatchable “The Life Aquatic With Steve Zissou”. Yikes, that movie just plain sucked!

More than a return to form for Anderson, “Darjeeling” is a giant, thrilling step in a whole new direction. Like P.T. Anderson (no relation) with “Punch Drunk Love” or Woody Allen with “Match Point”, Wes Anderson really shakes up his cool, ironic MO with this movie and man, I couldn’t be more impressed!

Oh yeah, and the post-screening Q&A was awesome! Anderson and Coppola had a really nice, chill vibe about them and were both very funny and totally self-deprecating…especially when Coppola’s iPhone rang (twice!) in the middle of the discussion. And best of all, I found a real seat next to Christine when someone left before the discussion. Yeah!

9 responses to ““The Darjeeling Limited””